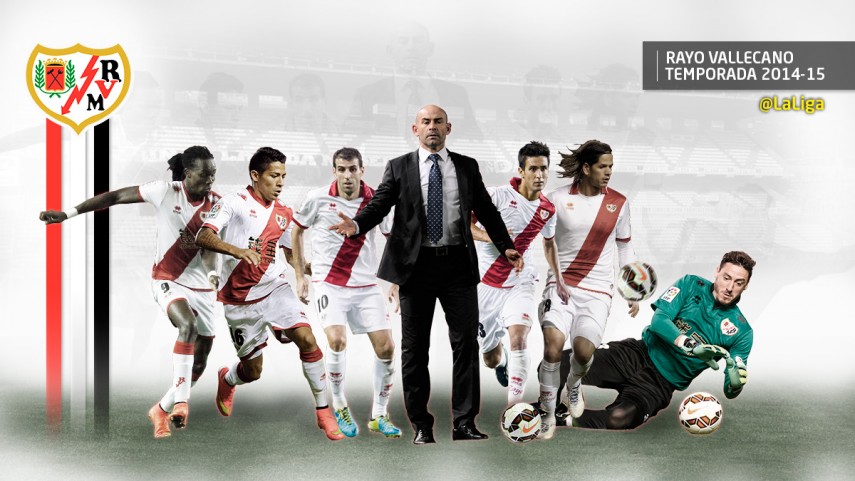 Rayo, for the fourth consecutive season, are tackling the Liga BBVA with a team packed with newcomers, but they will still be looking to entertain with the same, attractive brand of football.

Being a small club does not necessarily mean a team cannot be big on the pitch. Such is the case with Rayo Vallecano, who, since their return to the Liga BBVA in the 2011/12 season, have had to almost completely renew their squad every year.

The reason for this is the sports management of Felipe Miñambres in the offices and Paco Jémez on the pitch. For another summer, Rayo have had to use their imagination to almost completely rebuild their team, withat least 14 new players arriving in the Madrid borough of Vallecas. That may seem like a big ask on its own, but the task is even more complicated when you add the fact that Rayo require a certain type of player.

An idea
They are looking for footballers who match the club’s style, which is dictated by its directors and manager. Simply put, they want men who are good on the ball and always go out to win, regardless of the opponent. The side demonstrated this last Monday, when the Liga BBVA champions, Club Atlético de Madrid, struggled to get a nil-nil draw against them in the first match of their new campaign.

For another summer, Rayo have had to use their imagination to almost completely rebuild their team.

Paco Jémez, who is now in his third season in the dugout in Vallecas, and who, in that match, became the man to have managed Rayo in the most Liga BBVA matches (77, now 78 after the 2-2 with RC Deportivo La Coruña on the second matchday), has brought in new faces all over the pitch.

New blood at the back
Between the sticks, an old foe has arrived from RCD Espanyol, the Argentinian Cristian Álvarez, a player who is very adept at claiming crosses and an expert with the ball at his feet. This is an important asset for Jémez, as his team start their moves playing the ball from the back.

For the same reason, it is also important for Rayo to have defenders who like to have possession of the ball. A perfect example is Abdoulaye Ba who came from FC Porto. The 23-year-old player, who is well-built and towers over strikers at 1.97m tall, is destined to be one of the season’s breakthrough players. Meanwhile, the return of Antonio Amaya along with the addition of Quini and Jorge Morcillo, as well as Tito and Zé Castro, mean that Rayo have a very reliable backline.

Aquino, Kakuta y Baptistão
The commander of the midfield will again be the captain, Roberto Trashorras. Rayo will play at the tempo dictated by one of their most talented players, although the club have also brought in some excellent players in the middle of the pitch. Two, in particular, stand out, Javier Aguirre, on loan from Villarreal CF and the French Gaël Kakuta, on loan from Chelsea FC. Both of them like to play their football on the wing, are destined to have the fans on their feet with their individual moves.

The commander of the midfield will again be the captain, Roberto Trashorras.

Meanwhile, up front, one of the most exciting changes for fans of the club is the return Léo Baptistão. The young Brazilian, who is back on loan from Club Atlético de Madrid a year after leaving, will be another of Rayo’s attractions along with Alberto Bueno, who scored eleven goals in the Liga BBVA last season. Manucho, signed from Real Valladolid CF, will cause problems for defences with his physique and provide a solution for Jémez when matches take a turn for the worse.

Midfielders Alex Moreno, Licá and Jozabeb, together with strikers Jonathan Pereira and Alejandro Pozuelo, are the other players to have joined a Rayo that has in recent seasons become a stage for players to relaunch their careers or make a name for themselves in the Liga BBVA.