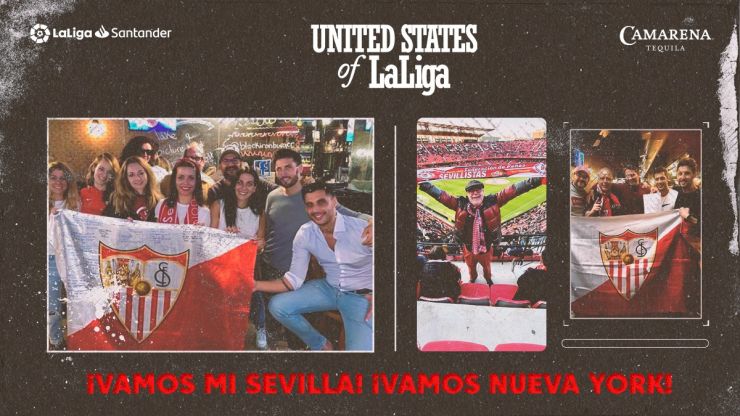 Paco Millán was looking for fellow Sevilla FC fans after moving to New York City in 2017. He got wind of a peña but couldn’t contact any members.

Paco Millán was looking for fellow Sevilla FC fans after moving to New York City in 2017. The filmmaker and reporter who “grew up with Sevilla football in my blood” got wind of a peña but couldn’t contact any members.

Shortly thereafter when his beloved club opened an academy in nearby New Jersey, Millán decided he would create a peña to celebrate his Andalusian roots, and more importantly, the six-time Europa League winners.

“I went up to Boston with my family and we were all wearing our Sevilla shirts,” Calahorro says. “Paco came out of the subway in his shirt and approached us, and that’s how I got into the peña. It’s something I’m very, very thankful for.”

The peña members get together at Black Iron Burger on W. 54th St. in Manhattan to watch the club. Coincidentally, the restaurant was co-founded by Victor Ortega, a Sevillian whose family owns approximately 1% of rivals Real Betis. Peña Betica de Nueva York meets at Black Iron Burger’s location on W. 38th St., though the supporters groups have been known to get together for El Gran Derbi.

“We have a little tension sometimes but when the match finishes, we say ‘We are Sevillians,’ and we have each other and we eat together and have fun,” Millán says. “Football also brings people together, even with the other side.”

Rivalries aside, Peña Sevillista NYC takes pride in its welcoming and festive atmosphere regardless of who Sevilla FC is playing.

“Every match is like a ceremony,” says Millán, who serves as peña president. “We sing songs—¡Vamos mi Sevilla! ¡Vamos Nueva York! We really enjoy the special time together. Football is something else.”

For Calahorro, being part of the peña is a constant reminder of home. Born and raised in Jaén, less than three hours east of Seville, Calahorro moved to the United States in 1989.

“It really is fun when we get together,” he says. “Other people who are at Black Iron Burger join in on the fun. It’s quite an experience. For people like us who are here for work, it’s a great way to cheer for your childhood team and remember what it feels like to be back home.”