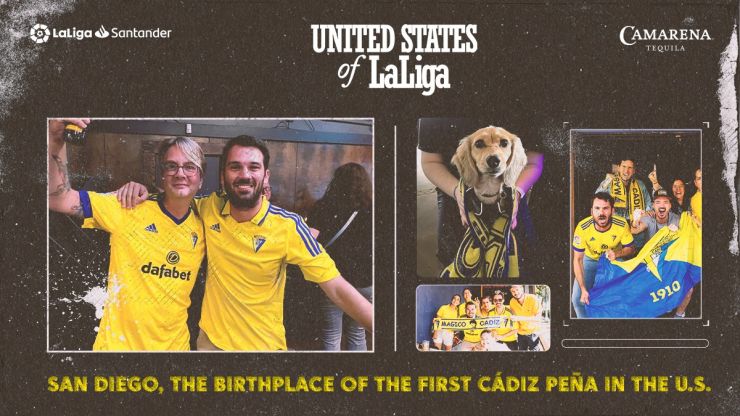 Paco León Infante was looking for somewhere in San Diego to watch his favorite soccer club. Having previously noticed English Premier League matches aired at Blue Foot Bar & Lounge, Infante requested from Rodney, the bar’s self-proclaimed “director of sports” who was in charge of the remotes, if he could have one TV to watch his beloved Cádiz CF.

“He gave me the smallest TV in the far corner,” Infante says with a laugh. “That season (2020/21) we beat Barcelona and Real Madrid so people were watching this random Spaniard yelling at the TV about a random club beating the clubs they actually knew.”

Infante, whose mother is from Vejer de la Frontera, has been following Cádiz CF since he can remember. His first in-person games were during the 2004/05 season as the club won the Segunda División and earned promotion to Spain’s top flight for the first time in more than a decade.

When he moved to the United States in 2015, Cádiz was stuck in Primera División RFEF, then known as Segunda División B, before beginning its steady climb back to LaLiga Santander five years later.

Thanks to the club’s success, LaLiga’s recent media rights deal with ESPN in the United States and the friendship he developed with Rodney and the staff at Blue Foot, Infante is able to watch Cádiz CF as often as he wants, even if that means being up at 7 a.m.; there’s a nine-hour time difference between California and Spain.

While the bar is still dominated by Premier League followers, Infante has been converting a few patrons to follow the ups and downs of El Submarino Amarillo, especially when the club staved off relegation in the waning minutes of the last match of the 2021/22 campaign; Infante also kept a close eye on the other matches via his iPad and laptop in his “control room” setup.

To officially celebrate Cádiz as well as his relationship with Blue Foot, Infante filed the paperwork to create the club’s first peña in the United States: La Peña ese Cádi EEUU, a play on the chant “¡Ese Cadi oé!”

“It was just making official a relationship that had been going on for three years,” Infante says. “For me, it was so we were in the database so if a lost soul Cádiz supporter was in San Diego, he or she knew where to go to watch the game.”

And they’ll know exactly where to find its founder cheering on Cádiz CF at Blue Foot Bar & Lounge.