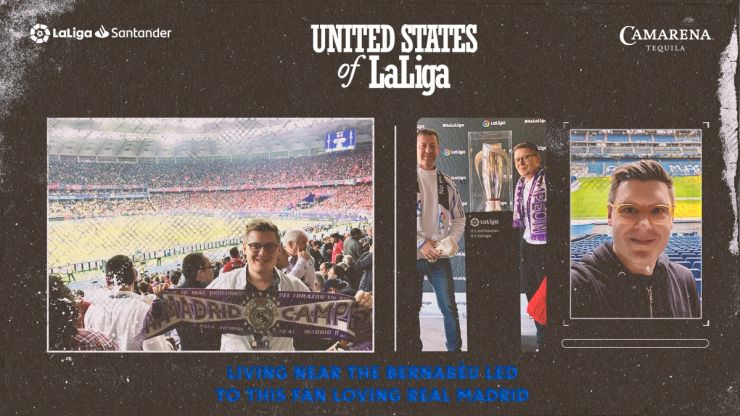 Living near the Bernabéu led to this fan loving Real Madrid

Martin Claessens’ career as a commercial officer has taken him all around the world from Switzerland to India, Colombia, Ukraine and now Canada, but it was his first time abroad that helped shape his soccer fandom

Martin Claessens’ career as a commercial officer has taken him all around the world from Switzerland to India, Colombia, Ukraine and now Canada, but it was his first time abroad that helped shape his soccer fandom.

Originally from the Chicago area, Claessens studied abroad in Spain for six months during college. Luckily for him, his host family lived within walking distance of Real Madrid’s home: the Santiago Bernabéu.

“At the time, I really didn’t follow soccer,” Claessens says. “I knew about it and I remembered the (1994) World Cup in the United States, but I wasn’t really into it at all. Living in Madrid for six months and within walking distance of the stadium, I started going to some games with friends and immediately I just fell in love with the team and the sport, and I’ve been in love with it ever since.”

“When I got there in the winter, they were behind the league leader by like 14 points and came back to win the league that year,” Claessens says. “It was an exciting year to become a fan of them. When people ask why I support Real Madrid, I tell them it sort of chose me more than I chose it. Since I was living pretty close to the stadium I couldn’t choose Atléti or Barça so I guess I sort of lucked out.”

Regardless of where in the world he’s lived since, Claessens continues to support Los Blancos, constantly searching for local peñas to connect with.

When he first moved to Toronto more than three years ago, he stumbled across a supporters’ group’s Facebook page but it appeared to be inactive. Any get-togethers and social gatherings were paused indefinitely when the coronavirus pandemic hit in March 2020, but once things opened back up, Peña Madridista Toronto began its revitalization with Claessens’ help as part of a coordination group that arranges watch parties and events.

Meeting at Firkin on Bay Street, the peña, which welcomed more than 100 viewers for El Clásico in October, boasts enough paying Madridista members to qualify for official status.

“The momentum is there, which is great,” Claessens says. “Now we’re finally filing the paperwork to formalize as a peña. The hope is by making it more formal, we can get more coverage of the peña from the club and LaLiga and it can grow it even further. The Toronto area has a massive population and we know there’s more LaLiga and Real Madrid supporters out there.”

Living near the Bernabéu led to this fan loving Real Madrid