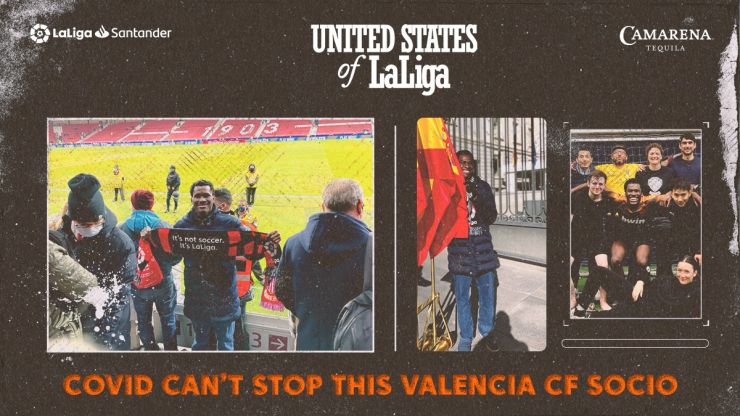 A little over a year ago, Taj Adeyemi was preparing to travel to Spain for the first time to not only soak in the country’s culture he had fallen in love with, but to watch as many LaLiga matches as he could during his time there

A little over a year ago, Taj Adeyemi was preparing to travel to Spain for the first time to not only soak in the country’s culture he had fallen in love with, but to watch as many LaLiga matches as he could during his time there.

But right before his trip, the Omicron variant of coronavirus began to spread causing Adeyemi to question whether or not he should continue with his trip.

“I already had all these things planned out so I figured I’d go for it still,” he says.

Everything went as planned during the first leg in Madrid. He was able to watch Atlético Madrid, Rayo Vallecano and Real Madrid in the capital before venturing to Valencia to watch his beloved club; Adeyemi also planned to go to Seville to watch Sevilla and Real Betis.

“The trip was going really well,” says Adeyemi, a Nigerian who has called Canada home for the past 11 years. “I get to Valencia and I’m staying five minutes from Mestalla. I’m thinking, ‘I’m here and I’m so close to Mestalla. Nothing can go wrong at this point.’”

The next morning, Adeyemi awoke in a cold sweat. He tested multiple times, each one unfortunately confirming what he feared: he caught Covid. Relegated to quarantine rather than cheering at Mestalla, Adeyemi was unable to watch Los Ches, though he has plans to return in early May for their match against Villarreal.

Despite being unable to see Valencia at their home stadium in 2021, Adeyemi has seen the club in person, flying from Toronto across Canada to Regina, Saskatchewan, to watch a friendly against the New York Cosmos in July 2017. As luck would have it, the club’s plane was delayed and he was able to cross paths with the players, including Rodrigo, who Adeyemi says it was “one of my dreams to see him play live.”

Adeyemi, who first got interested in LaLiga by following FC Barcelona in the early 2000s, was able to meet the players, take pictures with some and even ended up in a video on the club’s social media. From there, the rest is history.

“The way they treated me was super special and it made me feel more connected in a way you don’t really feel connected to other teams,” he says. “I saw myself really engaging with the club a lot more. I found myself really, really attracted to them. There’s a lot of things I valued FC Barcelona for that I see currently at Valencia.”