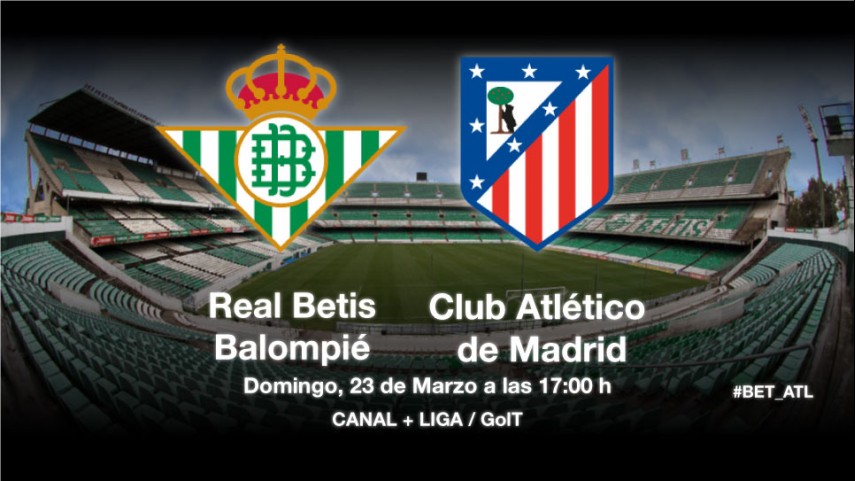 No margin of error at the Villamarín

Betis will be looking to close the gap on the safe spots against an Atlético de Madrid that are fighting to claim the top spot in the Liga BBVA.

On Sunday at 5 pm Real Betis Balompié will face Club Atlético de Madrid at the Benito Villamarín Stadium on the 29th matchday of the Liga BBVA.

The verdiblancos return to domestic competition with their sights set on survival after their victory against Getafe CF (2-0) and draw against Elche (0-0) in their last two league matches. Centre back Damien Perquis, Caro and Dídac at the back, midfielders Nosa Igiebor, Salva Sevilla, Joan Verdú and Xavi Torres and striker Chuli are all unavailable for the verdiblancos for this match. Léo Baptistão is also unavailable for contractual reasons. Humberto Calderón, the home team's manager, made it clear that their minds are already back on the Liga BBVA: “We must move on even though we have heavy hearts”.

For the rojiblancos, the only thing on their minds is a victory that would move them closer to league leaders Real Madrid CF, who are three points ahead of them. Only three defeats away from home so far in the Liga BBVA suggest that Atlético de Madrid will get something from the game at the Villamarín. Javier Manquillo and Tiago Cardoso will be absent in the team managed by Diego ‘Cholo’ Simeone, who is aware of the difficult of the match and his opponents’ improvement. “Betis have grown a lot since their visit to the Calderón. They're a team that have been improving in the Liga BBVA”, Simeone stressed.