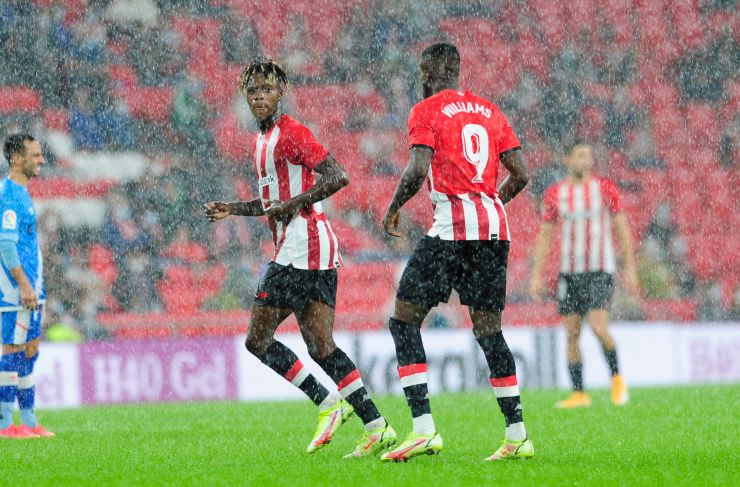 In the Basque side’s most recent win, Nico Williams assisted an early Iñaki Williams goal, before the older brother returned the favour in the second half.

Athletic Club have long seen themselves as a family and that was quite literally the case on Friday, when brothers Iñaki and Nico Williams powered the team to a stunning 4-0 home win over UD Almería. The two brothers both netted for the second game in a row, making them the club’s joint-top scorers along with Álex Berenguer and Oihan Sancet on three goals apiece, fuelling Athletic Club’s best start to a LaLiga Santander season in 66 years.

As might be expected from two players who grew up in the same household, Iñaki and Nico have a real understanding on the pitch and that was evident in the opening goal against UD Almería, when Nico sent in an inviting cross which Iñaki glanced deftly into the far corner before embracing his younger brother, eight years his junior. After Sancet had doubled Athletic’s lead, Iñaki repaid the favour to his sibling with a short pass into the feet of Nico, who fought off a defender to score from close range.

It was the second game in a row in which Iñaki and Nico both scored, following the 3-2 win over Rayo Vallecano last month, when they became the first set of brothers to score in the same game in LaLiga Santander for Athletic Club since Eneko and Antón Arieta in 1965. They are the first brothers to score in the same LaLiga Santander game for any club since Gabi and Diego Milito struck for Real Zaragoza against FC Barcelona in 2005.

The two players are in the form of their careers and both are set to go to the World Cup in Qatar, albeit for different teams. Nico made his Spain debut last month in the UEFA Nations League, while Iñaki played his first two matches for Ghana, where his parents were born.

“These have been an incredible few weeks for us and for our family,” Iñaki said. “I hope we can keep doing this for many years to come. But, I always tell Nico to just enjoy the moment.”

The goals are also flowing: Ernesto Valverde’s side have scored at least three times in their last three league games, something that has not occurred for eight years, back when Valverde was also at the helm and the club went on to finish fourth in LaLiga Santander and qualify for the Champions League.

Valverde secured European football in each of the six seasons he was in charge of the club across two spells and, after making a spectacular start to his third stint at San Mamés, there is every chance of that fantastic record continuing this season.

Also key to their rise has been a marked improvement in defence, a hallmark of Valverde’s teams over the years. Helped by the form of goalkeeper Unai Simón, who is certain to be Spain’s number one at the World Cup, they have conceded just four goals in their seven matches, giving them the third-best defensive record in LaLiga Santander.

They also boast the third-strongest attack, with their count of 16 goals bettered only by Real Madrid and FC Barcelona. While the Williams brothers might have grabbed the headlines lately due to their unique story, midfielder Sancet has also been in formidable form since switching to a more advanced position, scoring in his last three games.

With a club icon back in the dugout and with young, homegrown stars firing on all cylinders, the fans are also doing their part with the help of the launch of the Grada Popular de Animación, a singing section installed to improve the atmosphere at Sam Mamés this season.

“I hope the fans are enjoying this as much as we are,” said vice-captain Óscar de Marcos. “Football is about the here and now and we’re playing at a very high level right now and we want to prolong it. We’re in great form at the moment and we have to make the most of it.”