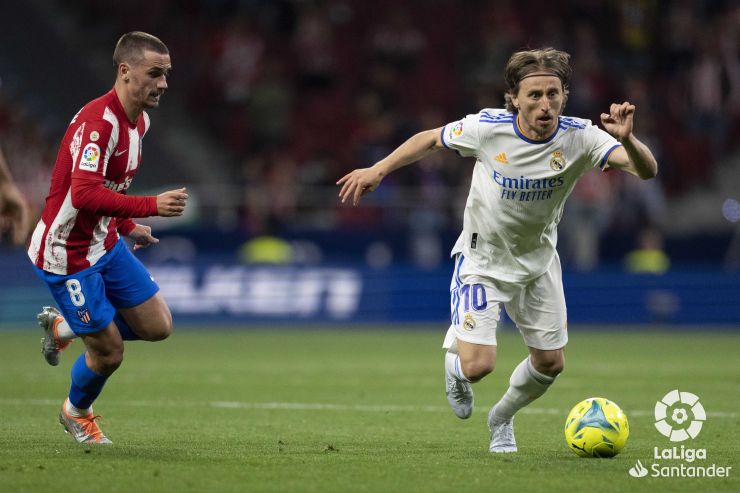 Players who have turned out for both Real Madrid & Atletico

The Madrid derby is one of those iconic fixtures that always generates a particularly special level of excitement.

The midfielder’s association with Real Madrid and Atleti goes right back to his childhood. The Spain international is the son of Paco Llorente and grandson of Ramon Grosso and has followed in their illustrious footsteps by turning out for both capital clubs.

Before joining Real Madrid in 2008, Llorente starred in various tournaments for the Rojiblancos. However, he settled at Real Madrid and worked his way up the youth teams. In 2014, Llorente played under Zinedine Zidane for Real Madrid Castilla. The following year, the fresh-faced starlet was handed his first-team debut by Rafa Benitez. The academy graduate got his first taste of LaLiga Santander action when he entered the fray as a 77th-minute substitute as the Merengues put Levante UD to the sword at the Santiago Bernabeu.

The following season saw Llorente head out on loan to Deportivo Alaves, where he enjoyed a productive spell in which he was one of the competition’s standout performers. The talented midfielder topped the LaLiga Santander recovery charts and on the strength of his eye-catching displays in Vitoria, Real Madrid opted to bring Llorente home. However, the Madrid-born pass master found game time hard to come by and opted to seek pastures new. His destination turned out to be Madrid’s cross-city rivals, with Diego Simeone securing Llorente’s services to replace Rodrigo after the midfielder departed for the Premier League. The versatile ace has proved to be a more-than-capable replacement and is playing some of the best football of his career as he contributes in various roles within Simeone’s tactical systems.

The Belgian shotstopper has tasted LaLiga Santander glory with both the Colchoneros and the Madridistas. He checked in at Atleti in 2011 and called time on his spell at the club in 2014. His performance levels constantly improved during that time as he emerged as one of the top goalkeepers in world football. The commanding goalie was the man between the sticks as the team lifted the 2013/14 league crown, claiming the distinction of having conceded fewer goals than any other goalkeeper in the division. Real Madrid came calling in 2018 and after a rather tricky start to life at the Santiago Bernabeu, Courtois has silenced all of his critics to cement his status as Real Madrid’s undisputed number 1.

The Spanish sharpshooter’s LaLiga Santander career has featured spells with both of the Spanish capital’s heavyweights. He made his top-flight debut in Real Madrid colours in the 2010/11 campaign and was handed a first-team squad number two seasons later. He went on to chalk up 63 appearances for the Vikingos and plundered 25 LaLiga Santander goals.

Following a spell in English football, the frontman decided to return home to his native Madrid, but this time he would don the red and white of Atleti. He is fulfilling all of his considerable potential at the Wanda Metropolitano and tops the team’s scoring charts so far this term.

The career paths of Mario Hermoso and the aforementioned Marcos Llorente are strikingly similar. The pair both came up through the ranks at Real Madrid and, after shining for other LaLiga Santander sides, they caught Atletico Madrid’s eye. The former Madridistas have become regular fixtures in Simeone’s side and are playing an influential role in the team’s new tactical system.

The marauding wing-back came through the door at Atletico Madrid on deadline day of the 2022/23 summer transfer window. The youngster learnt his trade in the Real Madrid academy and was handed his first-team debut and racked up 14 appearances during Santiago Solari’s tenure. Following stints at Sevilla FC and in England, Reguilon will be keen to make his mark for Simeone’s troops on his return to the Spanish top tier.