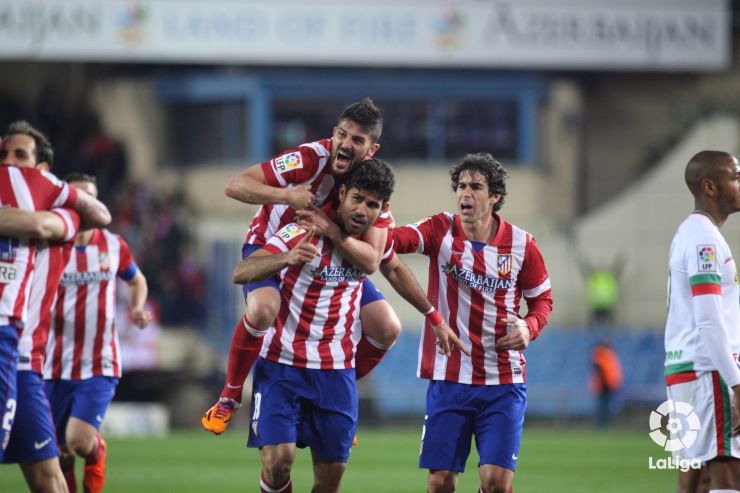 The Liga BBVA continues to thrill

Atlético and Barcelona both won their matches and now occupy the first two places in the table; Real Madrid lost to Sevilla and lies in third. Rayo is now unbeaten in five matches and have taken a step towards safety.

The Liga BBVA is nearing its conclusion and it is brimming with excitement. With everything left to play for, none of the teams is willing to take its eye of its objectives and it is becoming increasingly intriguing as the matches pass. Matchday 30 continued on Wednesday and Club Atlético de Madrid managed to stay at the top. The rojiblancos beat Granada CF (1-0) thanks to their top goal-scorer Diego Costa, who has now found the net 24 times this season. The Andalusians gave Diego Pablo Simeone’s men a tough ride, but once again the Vicente Calderón proved impenetrable.

Barcelona also did what they had to with a win in the Camp Nou. Two goals from Neymar and another from Leo Messi gave the home side a victory that leaves RC Celta de Vigo in the middle of the table with 33 points. The win was tainted for the azulgranas by the withdrawal of their goalkeeper, Víctor Valdés, with a knee injury.

The clash between Sevilla and Real Madrid was also a thriller, as the Andalusians had an unforgettable night with a stunning performance from Carlos Bacca. Despite the fact that the team from the capital took the lead through Cristiano Ronaldo, two goals from the Colombian striker, one in each half, gave the Andalusian side their sixth victory in a row to consolidate their fifth position. Carlo Ancelotti’s men, on the other hand, are in third place, three points behind the leader.

The bottom end of the table also promises a gripping conclusion. In Vallecas, Joaquín Larrivey was the star once more, scoring his ninth goal in this Liga BBVA season to give Rayo Vallecano a 1-0 victory over CA Osasuna, racking up the team’s fifth match on the trot without losing. The win catapults Paco Jémez's men up the table with 33 points and leaves the team from Navarre, a direct rival in the fight to stay up, in a tight spot.