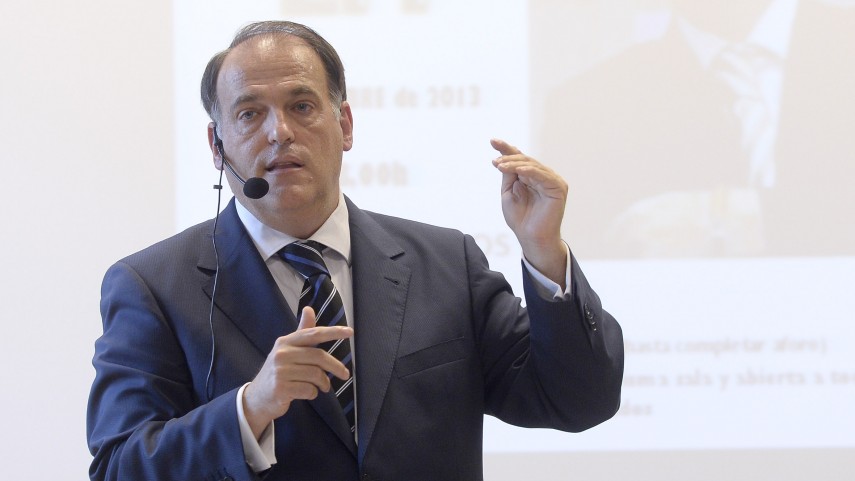 Javier Tebas spoke on everything related to the Spanish league.

Javier Tebas gave a conference on Tuesday organised by I.E.S. Ítaca of Zaragoza, it was titled "Professional Football in Spain. The other side of football". In it, the president of the Liga de Fútbol Profesional analysed all issues affecting Spanish football.

Tebas explained that "if debt is not reduced for three or four seasons, we will not have sustainable football", and added "that, and keeping the best footballers in the Liga BBVA, will be some of the solutions to making the future of football viable in Spain".

Continuing on the subject of finance, Javier Tebas explained: "The debt with the tax authorities at 39 of the 42 clubs, with the exception of Murcia, Jaén and Tenerife, is up to date. This does not mean that they are not it debt, it means that they have payment agreements that they are fulfilling". The President added that "Spanish football has reduced its debt with the Tax Agency by 12%" and explained: "The clubs' efforts to control spending and sell players are working".

Another of the issues to be discussed at the conference in Zaragoza was that of television rights, on which Javier Tebas stated: "The Liga does not decide on them, they are decided by the club's capacity to create value, on which the operator makes judgement". To which he added: "Centralised distribution is one thing, sales is another. I believe that by the 2016/17 season, the LFP will have centralised the clubs' television rights".

Javier Tebas explained the systems of the various European leagues in detail, in terms of both national and international television rights. In this regard the President stated: "England has a greater population and more pay-TV subscribers, subscription prices are greater and the international market with geographical areas with an English influence is much greater, and with links to the commonwealth". He also added that in South East Asia "there are no competitive national leagues to rival foreign leagues like the Premier League".

In the conference the president of the LFP made reference to television fraud and, in this regard, the protection of football, the operators and their subscribers: "Piracy is a very serious issue, and it is one that goes unpunished in Spain". Regarding Liga BBVA scheduling, Tebas admitted that "some European leagues are ahead of us", but he also revealed that "in Italy they are going to copy our scheduling system".

On match fixing, Javier Tebas supported the posture of Platini and UEFA by warning: "In Spain we are not saints. If we do not sell clean competition we cannot compete with the rest".