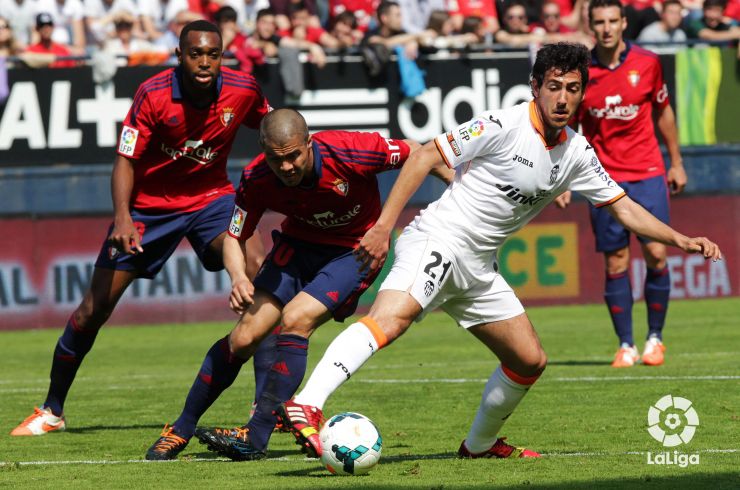 A Saturday of points shared

Real Sociedad was the only team able to break the deadlock that was the norm in the Saturday afternoon games in the Liga BBVA.

It was an afternoon of draws on matchday 35 of the Liga BBVA. CA Osasuna, Valencia CF, Levante UD and Getafe CF shared the spoils in the matches on the Saturday. Real Sociedad de Fútbol and RCD Espanyol were about to do the same in the final game, but a Carlos Vela goal in stoppage time prevented it.

Jonas' goal in the dying moments spoilt the party at El Sadar. Juan Antonio Pizzi's team were able to take something from a match that was going against them following an Oriol Riera goal for the rojillos before the 20th minute was up. With this draw, the Navarrese side are still looking over their shoulders at the danger zone while Juan Antonio Pizzi's men have made the fight for the European spots more difficult for themselves.

At the Ciutat de València parity prevailed and Getafe were unable to break the solid granota defence, so the score remained 0-0. The single point gleaned from the match all but guarantees survival for the home side, while the Madrid team remain in the relegation zone with 32 points.

Real Sociedad were the big winners of the day on Saturday as the only team able to break the deadlock that was a feature of the afternoon. They did it by the skin of their teeth in the 91st minute through a fabulous play from Carlos Vela, but the team from San Sebastián managed to come away with the three points against an Espanyol that remain in the top half of the table.