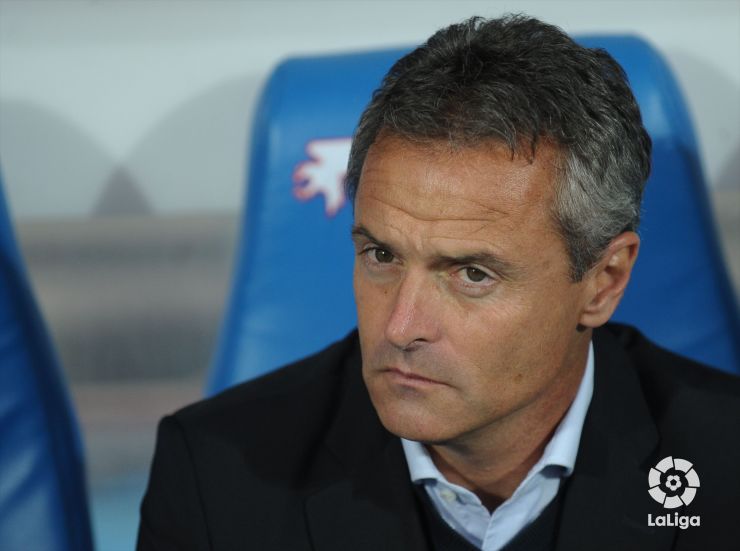 "Getafe should be among the top ten, not the bottom ten"

Fran Escribá, Elche’s coach, is in a positive mood going into the final stretch of the season with the team from Alicante and he analysed his next opponent in the Liga BBVA.

Elche CF’s salvation is in his hands, but he would rather not think about the pressure. "There is life after the next match", he says before taking on Getafe CF. Fran Escribá (Valencia, 3 May 1965) took the team up to the Liga BBVA last season and he has won the hearts of the fans and the respect of a dressing room that he has made his own. "Before the end of the season we have to organise another padel tournament, as that is also good for teambuilding", he commented. Although he always knew he wanted to be a manager, football is not his entire life. "I go running and I really like going to the cinema, but I don’t have time right now", he confesses. The final stretch of the season is very demanding.

LFP.es: The match with Getafe is not just any old game. It is a clash with a direct rival. How is the squad handling it?

Fran Escribá: It’s not decisive. In such a tight league it’s always important to collect points. And if we do it against a direct rival, all the better. But we are hopeful that, in the end, everything will come out as we hoped. We know that there is a chance of relegation, but I always try and take the pressure off of my players and make them understand that these are important matches but not decisive ones.

LFP.es: Is motivation Getafe’s best weapon at the moment?

Fran Escribá: Ending their run of several matches without a win has set them free. Getafe has an excellent squad and that is its greatest strength.

LFP. es: What does a coach who knows that he could go down in just seven weeks do to motivate his players?

Fran Escribá: What I always try to do is take the pressure that comes with the end of the season off them. The physical work has been done throughout the year and now the important thing is the strength of the group. The competition has enough tension so there is no point in adding more, so I try to let them see that there is life after the next match.

LFP.es: In addition, you are playing against your old team, what did you learn in the Alfonso Pérez?

Fran Escribá: I learnt a huge amount. Above all, I matured as a coach and became a manager. That was the first dressing room I managed professionally and I was lucky to have an exceptional group. We used to look for any excuse to get together for a meal and have a good time. Both the club and the players are a family and it was a wonderful year. Also, it happened gradually like with Elche. In theory, it was one of the favourites to go down, and in the end we saved ourselves.

LFP. es: That was Getafe’s first season in the Liga BBVA and now, ten years later, they could go down to the Liga Adelante.

Fran Escribá: If we analyse their squad, there is no doubt that, in terms of quality, they are a great team, with experienced players who have had great careers. It is a team that, like Betis, for example, should be among the top ten, not the bottom ten.

LFP. es: What does Cosmin Contra contribute as a coach?

Fran Escribá: He is a man who knows the club and has the support of the fans. He has the strength and he is competitive. Luis García has done a great job in recent years at Getafe, but, sometimes, the players and the teams get stuck and they need a change, a new voice to wake them up. That is what has happened with Contra.

LFP. es: How would you describe yourself as a coach?

Fran Escribá: I try to be close to the players. The old method by which the manager speaks to the player very formally, maintains distance between them and that is not my style. I consider myself a coach who believes in his group; and, of course, you cannot take care of and train your group if you are not part of it. You can be authoritative and close at the same time.

LFP.es: Will Elche change its brand of football to try and save the season or will you stick to your system?

Fran Escribá: We’ll prepare for every match differently depending on the opponent, but we’ll try and maintain our philosophy. We are a balanced team that sticks together and that, on a tactical level, knows exactly what it is doing. Defensively we’re solid and, although we have struggled to score this season, we’re not going to change our brand of football at this stage.

LFP. es: Is the club thinking about signing a striker?

Fran Escribá: Nothing we’re thinking about now is important if we’re not successful this season. It is true that we have lacked goals and, if everything goes well, the strikeforce will be one of the areas we’ll be looking at for next season.