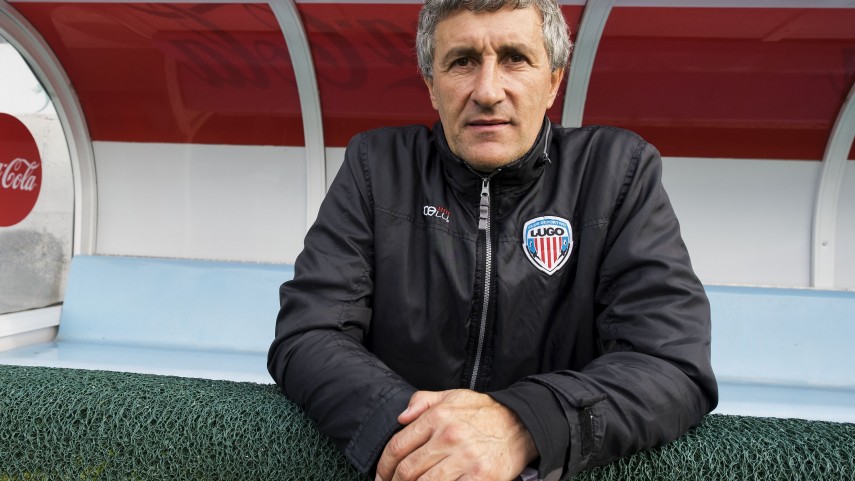 LFP.es interview Lugo's manager, the man responsible for the team's renowned personality and one of the most decorated coaches in the Liga Adelante.

After six seasons with CD Lugo, the coach who has imparted his philosophy of possession and passing on the Galician side admits he is just as enthusiastic as the day he arrived. Quique Setién (Santander, 1958), one of the keystones of the club, is "comfortable and happy" to be running a team that champion his ideas and are fighting to keep growing. LFP.es sat down with him.

LFP.es: This time last season you were the surprise package and already in the playoff positions. What's missing this year?
Quique Setién: Like last year, we're struggling to score and to get more out of the football we play. But, in addition, the opponents in the division are stronger than last season because the teams have started with more intensity. They also penalise you for errors during matches but, in general, I'm happy with the team's output.

LFP.es: What goal have you set for yourselves for this season?
Quique Setién: Our objective is always to stay in the division. We've been in the Liga Adelante for three years and we have to establish the foundations to keep growing. But of course we don't rule anything out.

"I'm prouder of the way the team plays than the results"

LFP.es: Lugo are known for playing with a lot of personality. That must be a compliment to the coach.
Quique Setién: Of course! And the thing I am most proud of is not the results, but what the other managers and players say about us, and how difficult it seems to be to play against us. Although, unfortunately, that doesn't give us points, it is important to have such a distinct philosophy, to develop it and believe it.

LFP.es: Also, this season you were named Best Manager in the Liga Adelante at the LFP Awards Ceremony again.
Quique Setién: For a team that is used to being in the middle of the table, that sort of thing is unusual, but I'm grateful that a nomination like that gives you credit. Even more so when, after the matches, the opponents come up to me and tell me how well we play and how difficult it is to beat us. That is so important for Lugo.

LFP.es: You've been at the club since 2009. How do you see your future?
Quique Setién: I'm starting to feel a bit like Alex Ferguson! I even joke about buying me a mausoleum in Lugo! The circumstances at this club are ideal for everyone who comes here to give their all: there are no economic problems, everyone receives their pay check at the end of the month, there is a complete understanding with the president and the sports director and nothing will change the normal operation of the club, because winning or losing doesn't mean anything other than three points.

LFP.es: R. Sporting, Real Betis and SD Ponferradina are your next opponents. That's a tough end to the year.
Quique Setién: I think this season has been very passionate. I love being able to host great teams like Betis, Osasuna, Zaragoza and Mallorca and play in stadiums that hold 20,000 people. But this year every match is tough because it is so close, and I understand that there are no small opponents.