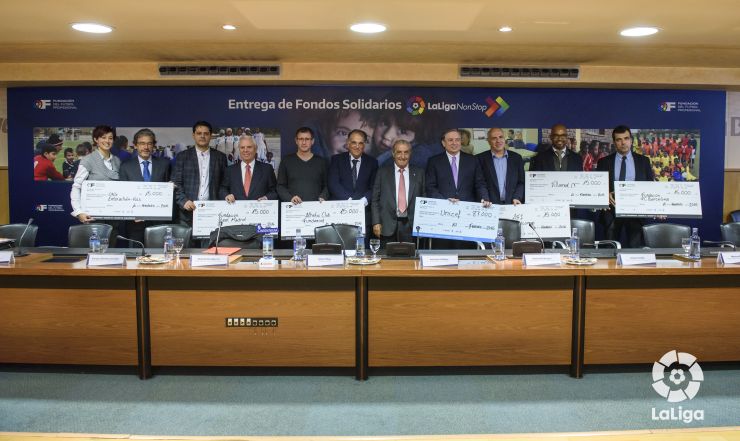 Wednesday 10 February, the LaLiga headquarters played host to one of the most charitable events of the footballing season. The LaLiga Foundation presented the funds raised for charity during Matchday 17, LaLigaNonStop, of the Liga BBVA on 30 and 31 December. The organisation's president Juan José Hidalgo opened the event with a call for solidarity: "We need to support and do more for all those children who are suffering."

LaLiga president, Javier Tebas, then went on to add "Football is indebted to the people of Spain and we have to return something they have given us. Professional football is supportive of charitable endeavours and this is an area in which our member clubs are increasingly involved."

Despite a pause for the 'Champions for Life' charity match in 2015, LaLiga took this opportunity to consolidate its association with UNICEF, making a donation to support the humanitarian work being carried out by the organisation with refugee children. "The LaLiga Foundation has become global and is aware of the current situation. Children are children, no matter where they were born," vice president of the UNICEF Committee in Spain, Juan José Almagro, stressed.

In addition, the Foundation presented six other cheques to a number of projects that make huge efforts on a daily basis to help those children in the greatest need. One of them is the 'Bakuva' project, put forward by the Athletic Club Foundation, aimed at a group of children at risk of social exclusion in Bilbao's 'Bilbao La Vieja' neighbourhood. According to Ricardo Mendiguren, who acts as head of CSR for the Bilbao institution, "we wanted to get closer to our local community and thus, through sport, we are committed to supporting the work done by the Bakuva Association." 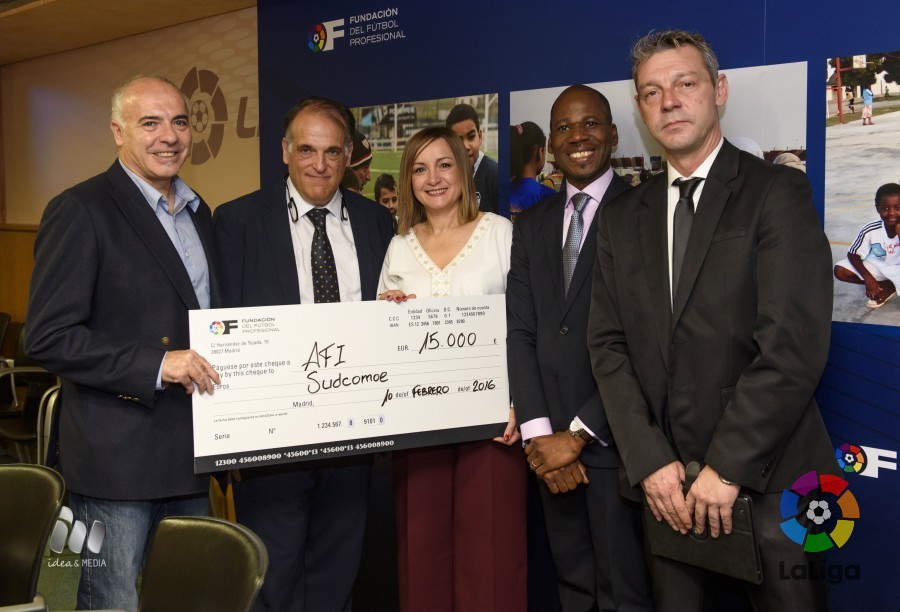 The 'FutbolNet' Project, carried out by the FC Barcelona Foundation, works with children in socially vulnerable situations in Catalonia, the Middle East, Africa and South America. "We are lucky to be able to count on the support of our players for this project. They have become leading figures and are committed to helping us build a better world," the director general of the FC Barcelona Foundation, Josep Cortada, explained.

The Real Madrid Foundation nominated its Social Sports School initiative in Lamu (Kenya), which works to combat child malnutrition and promotes the teaching of values ​​through sport, among other activities. Enrique Sánchez González, executive vice president of the Real Madrid Foundation, highlighted that "Real Madrid are involved in the development of 72 projects around the world. Our schools welcome thousands of children who are given a glimmer of hope through sport."

Villarreal CF representative, Marcos Senna, introduced the 'Endavant Igualtat' project which aims to improve the overall development of children, "The main focus of Villareal's charitable activities is directed towards those children with disabilities and few economic resources living in the Castellon province."

Meanwhile, more than 500 children from the Mekanissa neighbourhood in Ethiopia will now be able to continue to attend classes at the Don Bosco Youth Centre. Antonio Rico, representative of the 'Entarachén Vols' NGO, expressed his gratitude, adding that "unfortunately, there is a great deal of need in Ethiopia, which is why we have spent the past 18 years focused on helping the children of this region."

The Sud-Comoe International Football Academy, a comprehensive development project involving sports, school and education for Ivory Coast children completed the list of projects selected. The academy's director, José Julián López, described the children's current situation: "They are able to eat four times a day, to grow, to study, etc. We do not want to stop there, we want to do so much more and that is why this support from the Foundation really touches my own heart and that of all the children."