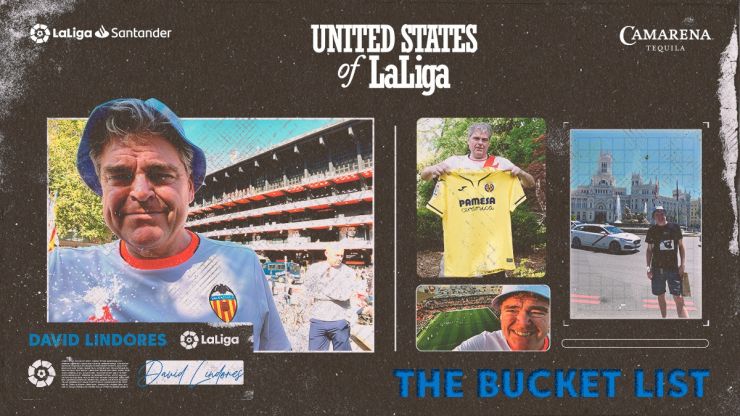 After David Lindores retired from 31 years in the music industry and broadcast media in December 2019, he made a list of things he wanted to do. He earmarked Spain as his next destination, especially since he had really gotten into LaLiga recently.

After David Lindores retired from 31 years in the music industry and broadcast media in December 2019, he made a list of things he wanted to do. Having already gone across the pond from Toronto to England to watch soccer, Lindores earmarked Spain as his next destination, especially since he had really gotten into LaLiga recently.

Not only was Lindores a fan of the league, but he was also learning Spanish, a goal of his after watching his mother Sheila battle dementia; studies have found bilingualism provides the brain with greater cognitive reserve delaying the onset of symptoms.

Ready to further his fandom while putting his Spanish to the test, Lindores unfortunately had to postpone his trip due to the Covid-19 pandemic. Not one to be deterred, he utilized that time to further immerse himself in the league, language and culture by listening to Spanish football podcasts, reading books about Spanish football and even taking Spanish lessons; he’s also eclipsed 900 consecutive days on Duolingo.

“I really became obsessive compulsive about it,” he says.

With the height of the pandemic behind and feeling comfortable to travel, the 60-year-old finally embarked on his journey to Spain last season where he watched six-and-a-half LaLiga matches across three cities in six days. Lindores started his trip with FC Barcelona and Real Betis followed by Ray Vallecano vs. Getafe.

Running on about five hours of sleep in two days, he finally checked into his hotel room before attending the Madrid Derby at Metropolitano Stadium. After taking the next day off to explore the Spanish capital by foot, he was back on a train to watch Valencia play at Mestalla Stadium, which “lived up to every expectation.”

Lindores then saw Sevilla against RCD Mallorca before doing double duty back in Madrid the next day on his final evening, watching the first half of Rayo Vallecano before going to Santiago Bernabéu to watch the second half of Real Madrid’s match.

Lindores said heading into the trip his favorite team was Valencia, and while he’s still partial to the club, his experience watching Betis at Estadio Benito Villamarín, which included trying to sing along with supporters under the tifo pregame, helped Los Verdiblancos “move a little ahead of them” in his rankings.

“I want to go again,” he says. “In my mind I want to go to the northern part of the country this time. I absolutely loved everywhere I went but I’d love to do Catalonia, Basque Country and maybe Vigo. If I go by myself I’ll do this idiotic pace again, but if my wife comes with me, we’ll do two games in a week, maybe.”