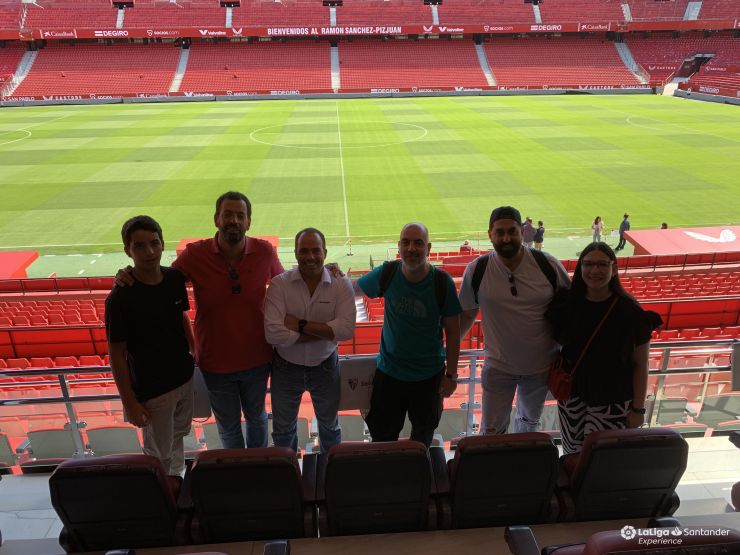 The Andalusian outfit welcomed the guests from ELEVEN Portugal and PrimeTel Cyprus, who were given a nooks-and-crannies tour of the Ramon Sanchez-Pizjuan and got to meet members of the club’s men’s and women’s first teams.

The 2022/23 LaLiga Experience campaign got off to a fine start in one of Spain’s most charming cities. The stunning Seville provided an ideal setting for this season’s maiden edition as the guests flying the flag for LaLiga international broadcasters ELEVEN Portugal and PrimeTel Cyprus were treated to a truly unforgettable getaway.

Sevilla FC flung open its doors to the visiting journalists and #LaLigaUltimateChallenge winners from last season to offer them a first-hand insight into one of LaLiga Santander’s most storied clubs.

First up, the VIPs were given a tour of the breathtaking Ramon Sanchez-Pizjuan that took in the dugouts, dressing rooms, president’s box and media room. Following their visit to Sevilla’s iconic home, the visitors were whisked away to the club’s Jose Ramon Cisneros Palacios training ground, where they had the chance to interview Thomas Delaney and Alex Telles, before putting the pair to the test in an exciting challenge.

Meanwhile, members of the Sevilla FC Women squad also took part in this maiden instalment of this season’s LaLiga Experience, with Amanda Sampedro, Toni Payne and Portuguese ace Diana Gomes showing off their ball skills in a fun-filled challenge, after which Gomes sat down with ELEVEN Portugal for an interview.

You can follow these and many other actions from the first LaLiga Experience event of the season on social media by using the #LaLigaExperience hashtag.