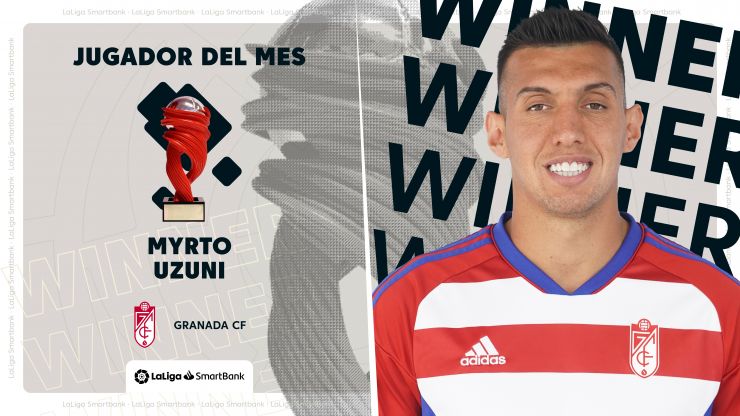 Granada CF's Albanian wideman receives the Player of the Month Award for August after making a key contribution to Los Nazaríes' superb start to the season.

Myrto Uzuni is the recipient of August's LaLiga SmartBank Player of the Month Award. The Granada CF winger has flown out of the blocks this season and played a prominent part in Los Nazaríes' fine start, putting them second in the table on nine points after securing three victories on the trot.

The Albanian forward has played a leading role for Aitor Karanka’s team, with his skill on the ball and constant forays into the opponent’s box earning him four goals and establishing him as one of the top scorers in the division.

He spearheaded two of Granada's three wins in the opening bouts of the season. Against Real Racing Club he scored in the dying minutes to tip the result in his side's favour and notch Los Nazaríes' first win at the Nuevo Los Carmenes stadium. The following matchday, we went on to hit a hat-trick at home against Villarreal B for Granada to add a further three points to their tally. Amazingly, he scored his first goal in that game with just 20 seconds on the clock.

The Granada number 11 came out on top in the voting ahead of the other players shortlisted for the award: Yuri de Souza, of SD Ponferradina, and Alberto Moleiro, of UD Las Palmas.