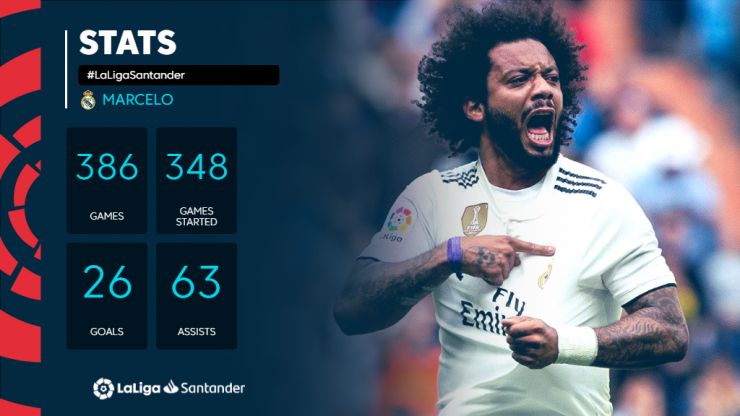 The Brazilian full-back bids farewell to Real Madrid after playing 386 games in the competition with a return of 26 goals and 63 assists.

Marcelo is a Real Madrid legend, and has deservedly earned this distinction. He joined Los Blancos in the winter transfer window of the 2006/07 season aged 18, and bids farewell at the age of 34 as the most decorated player in the club's history with 25 titles – among them six LaLiga Santander crowns.

However, these figures do not do justice to the Brazilian's significance for Madrid fans and football enthusiasts, having witnessed his sporting and personal growth over the years: from that early Marcelo with his youthful energy and restlessness to the Marcelo who is a captain, a senior player who never lost his way or an ounce of his talent.

The Brazilian leaves Real Madrid having played 16 seasons in LaLiga Santander, completing over 30,000 minutes in the competition. He started in 348 of the 386 games in which he played, scoring 26 goals and totalling 63 assists in a Madrid shirt (an average of roughly a goal every 15 games and an assist every six). His final goal came against SD Eibar at the Bernabeu in June 2020, and his final assist was for Rodrygo to open the scoring against RCD Espanyol in the match which would crown the capital club LaLiga Santander 2021/22 champions in front of their fans.

If there is one league season during his time at the club that deserves a special mention, it has to be 2016/17, a campaign in which Marcelo was at his physical and mental peak. Despite not being one of his most prolific seasons in terms of minutes played, his influence on the team's play was remarkable and he managed to hit the 10-league-assists mark for the only time in his career, with two goals to boot, that played an important part in lifting the LaLiga Santander title.

In terms of his participation, the 2009/10 season was the best of his career – it was the only one in which he played over 3,000 minutes, appearing in 35 matches (starting in 34). It is worth noting that during this campaign, with Manual Pellegrini at the helm, Marcelo was still establishing himself as a player and the Chilean manager often played him on the left wing, boosting his likelihood of making his mark. He answered the call out on the pitch, scoring four goals and providing nine assists, his best ever season in terms of direct goal involvements.

There is no doubt that Real Madrid and LaLiga are bidding farewell to a legendary player who blossomed under the floodlights of the Bernabeu to become a global football sensation. It has been a pleasure enjoying every matchday with you, Marcelo!