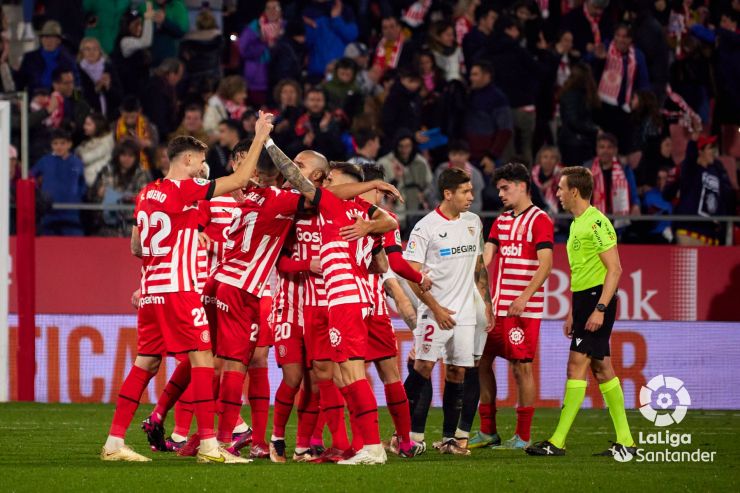 The newly promoted side have become one of the most thrilling teams to watch in all of LaLiga Santander thanks to the work of coach Míchel.

You never know what you’re going to get when you watch Girona FC, but one thing is for certain: it won’t be dull.

Of the 17 LaLiga Santander games the Catalans have played this season, both sides have scored at least once in 15 of them, while not a single game has ended 0-0. An average game involving Girona FC this season yields 3.12 total goals, which is the second-highest value for any side in the division, while the team’s capacity to score late in the game means you will be kept on the edge of your seat until the final whistle.

Míchel’s side have scored no fewer than seven times in the final 10 minutes of matches, helping themselves to an extra eight points. Their never-say-die attitude has served them well lately, as they are on a seven-match unbeaten run, their longest ever in LaLiga Santander.

They set this new club record with a typically entertaining match against Sevilla FC on Saturday, recovering from conceding an early goal to win 2-1. And, you guessed it, they did so thanks to a late goal.

Míchel’s side had made a thunderous start and missed six chances before they were outdone down the other end by a cross into their box and a towering header from Tanguy Nianzou in what was the visitors’ first opportunity.

But, Girona FC are playing with so much confidence right now and, one minute into the second half, Toni Villa galloped down the right wing and cut the ball back to Cristhian Stuani, who kept his composure to notch his fifth goal of the season from only four starts.

Not content with a point, the hosts went out all guns blazing for a winner and finally got it with the help of two substitutes, with Valery Fernández crossing for Yangel Herrera to score the winner in the 88th minute.

“More than the result, I’m happy with the team’s performance,” said Míchel. “We played an excellent game, as the attacking players were incredible and we managed to outplay a team as strong as Sevilla FC.”

The incredible job done by Míchel at Girona FC

Míchel deserves a lot of the credit for the way the Blanquivermells are playing. The former midfielder spent most of his playing career at Rayo Vallecano and started his coaching career in Vallecas too. Just as he did with Rayo Vallecano, Míchel took over Girona FC when they were in LaLiga SmartBank and he propelled them back to the top flight in his first full season.

And now he is fighting to do what he was unable to do with his former club and keep Girona FC in the top flight.

The match with Sevilla FC was fundamental to that ambition, and the victory opened up a six-point gap between Girona FC, who climbed up to 11th in the table, and the 18th-placed Los Hispalenses, who occupy the last spot in the relegation zone.

Their unbeaten run is also helping grow confidence around the club, and you can see why. As well as beating Sevilla FC, who lest we forget finished fourth last season and began the campaign in the Champions League, the Catalans have overcome Athletic Club and held champions Real Madrid to a 1-1 draw at the Santiago Bernabéu.

A difficult run of fixtures awaits them now, away to Villarreal CF and home to FC Barcelona and Valencia CF, but if their recent run of form is anything to go on, they should have nothing to fear.

“Right now we need to take each game as it comes and keep our feet on the ground,” added Míchel. “The sensation we have is that we can compete in every game and compete against any opponent, but we keep conceding goals and we need to score at least twice to win. We have to keep on making adjustments and work to improve, but I know the squad I have is very good and our results prove that.”

As Girona FC try to stop leaking as many goals at the back, fans tuning in will be able to enjoy some thrilling football. The last 14 Girona FC LaLiga Santander games have seen both teams find the back of the net, an incredible streak that makes them one of the most entertaining sides in all of European football right now.