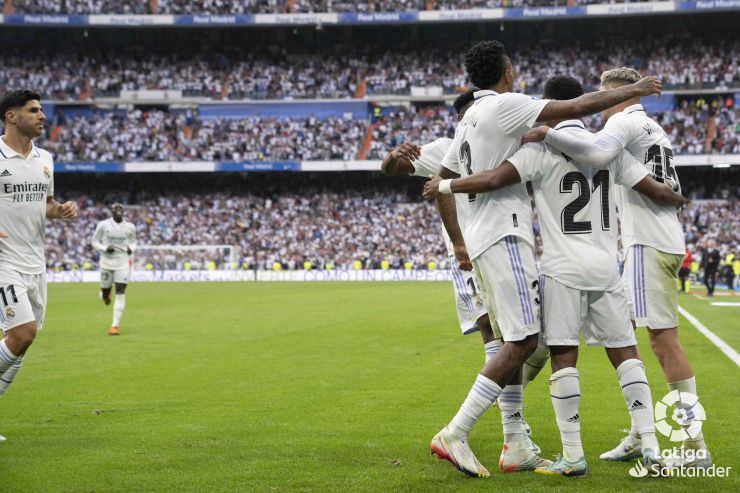 Five things we learned from Real Madrid’s victory in ElClasico

The first ElClasico of the 2022/23 season finished in a 3-1 victory for Real Madrid. After Karim Benzema and Fede Valverde opened the scoring, Ferran Torres pulled one back for FC Barcelona. However, Rodrygo won and converted a late penalty to seal the three points for the reigning champions. There were several lessons from this blockbuster match, including the following five.

Xavi’s side went into the game with the best defence in Europe’s top five leagues, having kept clean sheets in seven of their eight matches this season and conceding only one goal. But, it took only 12 minutes for Real Madrid to strike as Benzema became the first player in 636 minutes of LaLiga Santander game time to beat Marc-André ter Stegen.

The goal injected more confidence into Los Merengues and seemed to drain it away from Barça, with Valverde scoring the second goal later in the first half after being afforded time and space to pick his spot.

Rodrygo added the third goal in added time, meaning that in the space of 90 minutes Real Madrid scored triple the number of goals against FC Barcelona than their eight previous opponents had managed.

Valverde is in the form of his life and did not disappoint on the biggest stage of all. The Uruguayan gave the complete performance, playing as a makeshift right-back for sections of the game, particularly when FC Barcelona were in possession, and his selfless defensive work had the effect of freeing up Luka Modrić to work his usual magic, while he also combined seamlessly with Dani Carvajal down the right flank.

When his side had the ball, Valverde threw himself forward and he caused so much danger in attack. His goal, his fifth strike in all competitions this season, was the latest demonstration of his ability to shoot from distance.

Benzema is on his way to Paris for the Ballon d’Or ceremony and his performance against FC Barcelona only further staked his claim to win the most prestigious individual award in football. Along with Valverde, the French striker was Real Madrid’s outstanding performer and it was fitting that he got the first goal of the game, coolly smashing in on the rebound after Vini Jr had been thwarted by Ter Stegen.

The Frenchman could have had a second goal to put the game to bed but was denied by a fractional offside. Nonetheless, he was given a rousing standing ovation by the Bernabéu faithful when he left the pitch in the 88th minute to make way for Rodrygo. After the final whistle, he celebrated with the crowd again and he could soon be presenting them with his Ballon d’Or trophy.

FC Barcelona were naturally disappointed with the way the match panned out, but they could take encouragement from how they fought their way back into the game late in the second half, setting up a tense finish.

Their hopes were lifted with the introduction of two of their homegrown youngsters, as Gavi injected some much-needed bite and purpose into the team while Ansu Fati breathed life into Barça’s attack, firing just wide moments after coming off the bench and then providing the spark for Ferran Torres’ goal with a superb individual run. The forward even conjured up a chance to equalise, but was not able to take it. Even though early ground has been lost to their title rivals, Barça can be assured the future is bright in the hands of these youngsters.

Rodrygo is the man for the big occasion again

Even with just five minutes plus added time to make an impact, Rodrygo made the most of the opportunity. He drew a foul from Eric García to win a penalty and confidently dispatched it to see Real Madrid home and dry.

The forward has a remarkable knack for making the difference in clutch moments. His late goal against Chelsea in last season’s Champions League quarter-final second leg halted a revival from the English side while in the semi-finals he pulled off an even bigger miracle by netting twice in two minutes against Manchester City. The Brazilian has continued to seize the moment this season, also scoring the first goal in the derby win over Atlético de Madrid. When it comes to the biggest occasions, Los Merengues know they can count on Rodrygo.