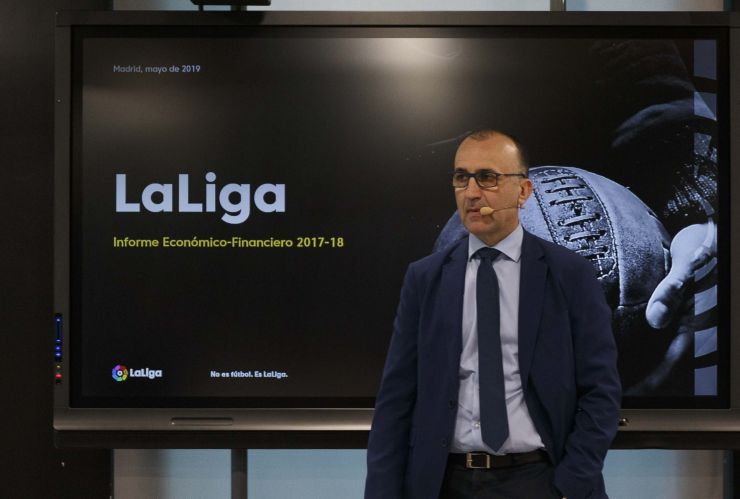 With a solid, positive and growing set of results across the board, LaLiga has achieved the best figures in the competition's history.

According to the latest financial report of Spanish professional football, corresponding to the most recent completed season (2017/18), LaLiga's clubs posted revenue of €4.479 billion, representing growth of 20.6% over the previous season.

This is the largest positive annual change in recent years and particularly notable given that it has occurred following several financial years in which LaLiga has been consistently posting double-digit growth rates. The results fall at the midway point of the three-year audiovisual cycle for the national market, so are not affected by any sudden increase in revenues.

The 2017/18 season saw two new factors making a big contribution to the results: commercial revenue and revenue from transfers. These have now taken a central role alongside broadcasting revenues as key drivers of annual growth.

In the case of commercial revenue (without including turnover from advertising), the annual increase was 34.1%, amounting to turnover of €838m, which is indicative of the fact that Spanish clubs are becoming an increasingly attractive medium for sponsors.

Meanwhile, in the case of revenue from player transfers (i.e. sale price), the annual increase of 104.3% allowed turnover in this section to double in a single year. The entry of €1.018bn is symptomatic of the significant capacity held by Spanish clubs and SADs for creating sporting value.

Audiovisual turnover received by the clubs managed to surpass the €1.5bn mark for the first time and will increase from the 2019/20 season as a result of the new audiovisual cycle negotiated for the national market and the international agreements that have been signed.

LaLiga’s results have been achieved at the same time as an increase in operating expenses (OPEX) and at a time of high investment intensity (CAPEX).

OPEX (€3.169bn) increased by 18.7% in 2017/18, propelled especially by increases in sports staff expenses, which represent an investment in talent and a potential source of income for LaLiga in the medium term. This will be achieved through both rotation – transfer – as such, as well as the increase in sporting potential and the general appeal of the competition.

Meanwhile, gross CAPEX on infrastructure and players (€1.341bn) followed the same trend with annual growth of 11.8%.

Without doubt, these are considerable levels of expenses and investment, providing the best guarantee of maintaining the quality of LaLiga out on the field of play and its appeal over the medium to long term.

LaLiga achieved all of these figures while simultaneously maintaining a downward trend in the degree of leverage. The ratio of financial debt to EBITDA of the competition was 0.9x, the lowest level on record.

It is also important to underscore that LaLiga 1|2|3 is contributing more and more not only to the revenue of LaLiga as a whole, but to the earnings (all the indicators for LaLiga 1l2l3 are in positive territory and show upward trends) and to the creation of cash flow and value for the business.

LaLiga has also reviewed two special groupings for internal financial analysis, Netted LaLiga and Netted LaLiga Santander, which exclude the two largest clubs, Real Madrid and Barcelona. Both of these groupings are showing a rapid level of convergence in terms of revenue. In relative terms, some indexes or ratios are even better. This is indicative of a business that is increasingly more fairly distributed and more sustainable over the long term.

The above has led LaLiga to obtain an overall operating profitability index (ROIC) of 12.3% (15.1% adjusted) in the 2017/18 season, six decimal points higher than the previous season and, in any case, substantially better than those of other leading competitions.

Finally, LaLiga earmarks around 2.0% of its turnover for corporate social responsibility projects, an amount which is significantly higher than the majority of companies and industries of a similar nature. This allows for the development of pioneering initiatives mentioned in the report which remain an immense source of pride.

Overall, LaLiga’s clubs create a professional football industry which produces an impact on national GDP equivalent to 1.37% and which directly or indirectly employs around 185,000 people (0.98% of average employed population in Spain over the past year). To this can be added the more than €4 billion that LaLiga contributes to the state coffers in the form of taxes.