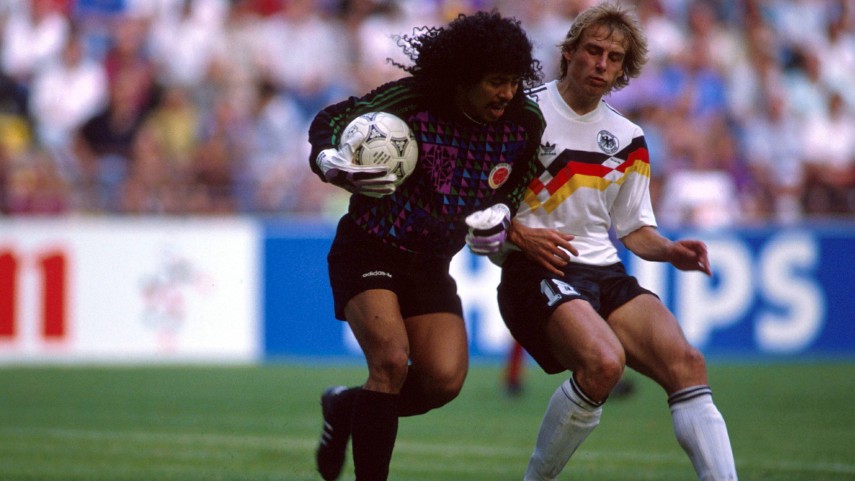 The Colombian goalkeeper led a golden generation of Colombian football with his flair between the sticks.

If there is one instantly recognisable figure in the world of football, it has to be that of René Higuita. The Colombian keeper booked his place in history with a famous move against England that changed his career, in the famous Wembley Stadium. The move was patented 'The Scorpion'.

Higuita was at the centre of that golden generation of Colombian football that took the side back to the world stage. He starred alongside players such as Carlos Valderrama, Faustino Asprilla, Andrés Escobar, Freddy Rincón and Leonel Álvarez, among others.

His role for his nation
Higuita started to find his place in the team as soon as he joined the Colombian first squad. His first and only participation at a World Cup came in Italia '90, where, with his superb saves and brilliance with the ball at his feet, he caught the eye of the footballing world. Colombia reached the second round that year, but an error from Higuita as he tried to dribble past Roger Milla allowed Cameroon to progress.

His World Cup record
A 5-0 thumping at the hands of the all-powerful Argentina in Barranquilla in the qualifiers for the 1994 FIFA World Cup was the downfall of a Colombian side that failed to meet expectations at the finals.

Quick elimination in USA '94 was one of the low points for a generation that qualified for three consecutive World Cups, a genuine achievement in Colombian football. Higuita did not play for his country in the US or in the French tournament in 1998, but his contributions to world football went beyond the boundaries of the pitch.

His legacy
In 1990, René Higuita set the record for the longest time unbeaten by a Colombian keeper at the World Cup, and it still stands today. The ex-Real Valladolid CF player played 165 minutes without conceding a goal. In the current World Cup in Brazil, his country’s keeper, David Ospina, was two minutes away from breaking it when he conceded in the 73rd minute of the match against the Ivory Coast.

Higuita will always be considered one of the most emblematic keepers of South American and world Football. His style and audacity changed the way keepers were seen forever and his ‘Scorpion’ will be remembered for years to come.