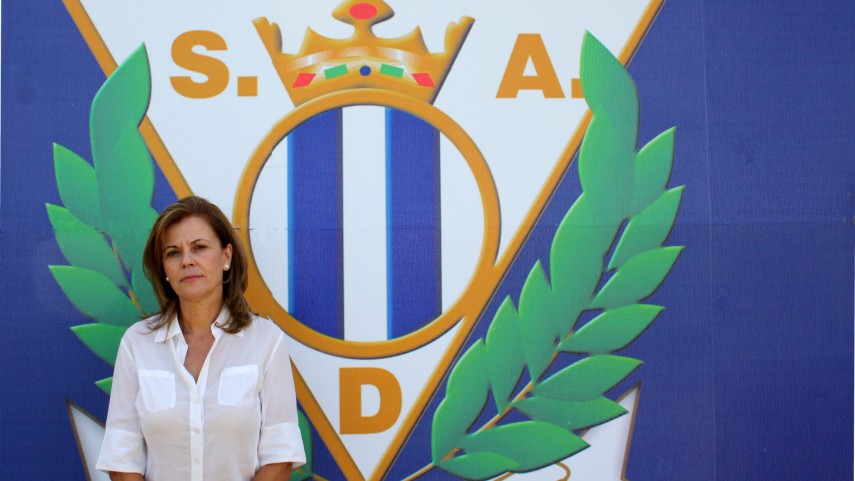 Victoria Pavón Palomo is living a dream at the helm of CD Leganés. Six years ago, in 2009, she was appointed chairwoman of the Madrid club when it was going through one of the most difficult periods in its history. Now, after more than five years of hard work, the Madrid side has returned to the Liga Adelante after a decade’s absence. The senior executive of the club in the south of the Madrid region spoke exclusively to LFP.es about their exciting return to the division.

LFP.es: You are entering your sixth season at the club in the best way possible. What does promotion mean to the club and the town of Leganés?

Victoria Pavón: It’s something that has been achieved after a lot of hard work, but it also means a great deal of responsibility, and it’s a joy for the town. It has somehow engaged those who were waiting for this to happen. A real joy.

LFP.es: In 2009 you became the first chairwoman in the history of the club. How did this opportunity arise and what did it mean for you?

Victoria Pavón: It was a coincidence, due to bad times for the former club bosses. I went in with my family of shareholders, they encouraged me to do it and that’s how it all started. Besides all the hard work, it meant going into an unknown world, like going in front of a camera [she laughs].

LFP.es: How have your life and the club changed since then?

Victoria Pavón: Football was always a part of my life, but now it’s what I devote most of my time to. Everything revolves around Leganés and football, and to be honest it has changed a lot. We tried to add our touch to the club and do a lot of work on the social side of it. We tried to have more presence in the media, to be heard and taken into account...

LFP.es: How do you see the current role of women in the football world?

Victoria Pavón: It happened years ago, particularly in terms of reporters. Chairwomen are perhaps less common, but in almost all clubs there are women directors. This year I was surprised to see so many women, particularly in the Basque Country.

Victoria Pavón: He was the manager who won promotion. He’s a very serious and demanding person. Internally he is a very warm person, homespun, so to speak. My experience with him has been very good; he’s very professional.

LFP.es: As chairwoman, do you like to be someone who is close to the players?

Victoria Pavón: My day-to-day work is close to them. I know them all personally and over the season I usually end up knowing their families. I’m a person who likes to be close rather than distant. I like travelling, for me it’s not a sacrifice, and whenever I can I tend to travel with the team. Since I’ve been chairwoman I think I have only missed one match in all these years.

LFP.es: The fans are responding beautifully. You now have over 3,000 season ticket holders, a club record.

Victoria Pavón: There’s a sense of excitement because it has been ten years since the club went down and it was what the fans demanded. Still, considering that Leganés is a town of almost 200,000 inhabitants, 3,000 season ticket holders isn’t much. We have to aim higher. Everything will depend on the results, because when you’re good, people get excited. We hope to reach 4,000 season ticket holders.