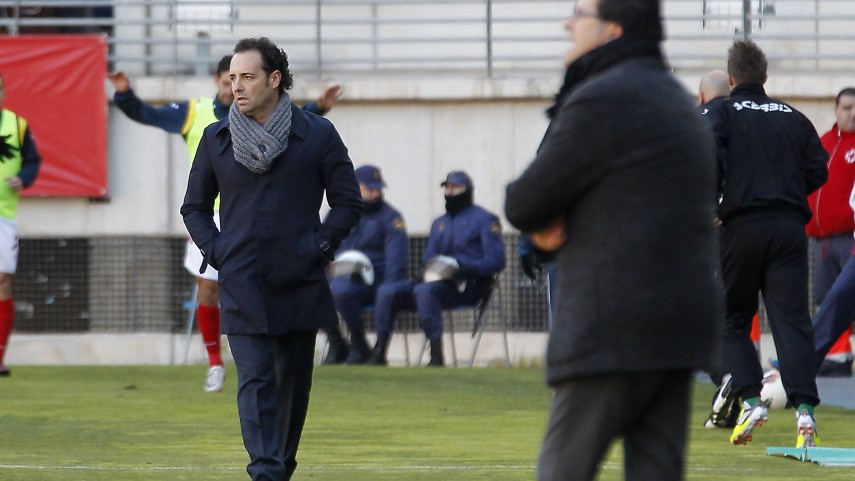 "With hard work, togetherness and dedication we can achieve our goal"

José Bordalás, Alcorcón's new coach, spoke with LFP.es about returning to the helm of the side from the capital.

José Bordalás (Alicante, 1964) has become AD Alcorcón's great hope. The manager from Alicante, who left the Madrid side in the summer after taking them to the promotion playoff, is back to take over the reins of the team after Miguel Álvarez was dismissed. However, in his second spell at the club, Bordalás is tasked with turning around a team that is deep in the fight to avoid relegation from the Liga Adelante. The 49-year-old coach spoke to LFP.es about his return to the alfareros.

LFP.es: What was your reaction when they offered you a return to Alcorcón?
Bordalás: It was greatly satisfying. That they turn to you in a difficult situation means that you have previously done a good job.

LFP.es: What does it mean to you to be at the helm of the team again?
Bordalás: It is a sizeable challenge and also a different one, because the situation is different to that of last season. When a coach arrives in the second half of the season, it is more difficult because there are players you don't know and you need a period of time to get to know the squad and get across what you need from them. With a pre-season everything tends to be a little easier.

LFP.es: How was the dressing room when you arrived and what message did you transmit to the players?
Bordalás: I tried to build them up and give them confidence. When results are not good, morale is not perfect. When there is a change of coach you tend to think that he was the only reason, but that is not the case at all. I am convinced that Miguel Álvarez worked 100% to try and improve results.

"Returning to Alcorcón is greatly satisfying and a very sizeable challenge"

LFP.es: What differences and similarities do you see between your team last year and the current one?

Bordalás: Every manager has their own style. I have my own way of doing things and some things are very similar, because there are players that were with me, but there are also new players and the previous coach had tried to impress his footballing ideas on the team.

LFP.es: What can the new players bring to the team?
Bordalás: It is true that two of the players who have come in have never played in Spanish football and they will need some time to adapt (Dudu Biton and Guillermo Méndez). In the case of Pau Cendrós, although he has come from Belgian football, he is familiar with Spanish football and he has experience. We believe they can all help us.

LFP.es: Last season you were in the promotion playoffs. Is Alcorcón a team with high aspirations or is it's reality fighting to stay up?
Bordalás: The team's current reality is the fight to stay in the division. Last season it was too, but luckily we managed it in record time and everything we did afterwards was a bonus and added success. It was a magnificent season.

LFP.es: Since your arrival, the team are unbeaten with one draw and one victory. How do you see the next match against Deportivo?
Bordalás: We are really excited. It's a historic team that is tremendously difficult, with some great players and they are very compact. We always come into a match with the intention of collecting all three points. It is my policy and that is what I try to get over. This match will be no exception.

LFP.es: What message would you like to send to the fans?
Bordalás: To have everyone's support is very important. The fans are very sincere and passionate about the club. I would like to thank them because they have always behaved perfectly with the team and towards me. They are aware that the team is going to turn it around.

LFP.es: Are you convinced that you will achieve your goal?
Bordalás: Yes, of course. When you take on certain challenges, you do it because you believe in the possibility of achieving them. So far I am tremendously convinced. I know it is difficult, but I believe in the team. With hard work, togetherness and dedication we can achieve it.