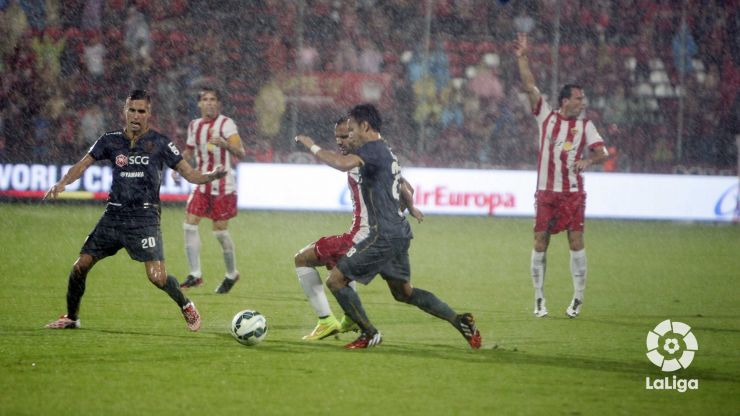 UD Almería drew 1-1 against Muangthong United FC in their first match on the LFP World Challenge Tour, in a game that was affected by heavy rainfall.

The Andalusian side was welcomed by a multitude of Thai supporters when they arrived at the SCG Stadium, creating a great atmosphere for football. The opposition’s supporters awaited the UD Almería bus, in the hope of seeing the Thai star, Teerasil Dangda, who was excited about returning to his old stadium.

Just before the match, Fernando Sanz, Liga Profesional de Fútbol ambassador, presented a plaque to the president of Muangthong United FC, as a show of gratitude for the welcome given to UD Almería as a member of the Liga de Fútbol Profesional. The Spanish badminton team also took part in the event in representation of Spanish sport.

In the first half, which was affected by heavy rain, Jonathan Zongo put Francisco Rodríguez’s men ahead, but the celebrations did not last long for UD Almería as Muangthong’s captain, Datsakorn Thonglao, levelled the scores two minutes later.

In the 73rd minute, Teerasil Dangda was taken off and the local fans took the opportunity to give the number 18 player a standing ovation. Despite some good chances in the second half of the match, neither side was able to put the finishing touches on the LFP World Challenge event.

At the end of the match, defender Ximo Navarro spoke about the game: "Despite the fact that this is the preseason, we wanted to win. We have made a good start, but there was a lot of rain, strong wind and in the end there were puddles and that really affected us. Even so, we’re very happy, we received a great welcome and they cheered us on throughout the game. We’re very grateful".

For his part, the Andalusian team’s manager, Francisco Rodríguez, praised the work of Teerasil in the game against his old team. "He is a player that is in form. He still has to adapt because he has come to a new continent, a new culture and a new type of football. We’re happy although we know that he will really improve and that he will be able to contribute what we expect of him".

UD Almería will continue their preseason on 6 August against Al Phuket FC, which will be their final game in the LFP World Challenge Tour.