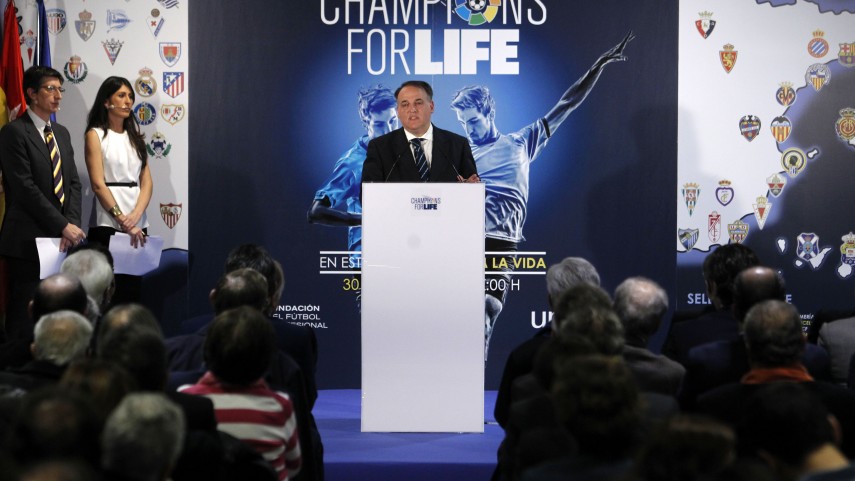 Tickets for Champions for Life now on sale

Tickets are now on public sale for the match which will be played on the 30th of December at the Santiago Bernabéu.

Lots of games are played during the Liga BBVA and Liga Adelante season, however none with a message of solidarity like this. The Champions for Life match will be played on the 30th of December at 19:00 in the Santiago Bernabéu, in what will be a celebration of all things Spanish football for the benefit of those who need help the most.

The tickets to see the Champions for Life encounter are now on sale. Members and the general public alike can purchase them in various ways.

The can also be bought at the Santiago Bernabeu’s ticket office in person.

The general sale of tickets at the stadium will be held on the 23rd, 26th, 27th, 28th and 29th from 10:00 – 19:00. They can also be bought on the day of the match from 10:00. Tickets bought online should be printed off before entering the stadium, either at home, in any Bankia ATM, or alternatively brought electronically via the applications Passbook (Apple) and Passwallet (Android).

On the 30th of December at 19:00, Spanish football has a date with solidarity in the Santiago Bernabéu. The Professional Football Foundation and UNICEF’s Spanish Committee have organised, for the first time, Champions for Life, a match featuring stars of the Liga de Fútbol Profesional, which will be played at least for the next three years.

In addition to its solidarity, Champions for Life is a footballing spectacle in which the best players will partake. There will be two Liga de Fútbol Profesional XIs, East vs. West, in which all clubs from Liga BBVA and Liga Adelante will be represented.

The players will be assigned to one of the sides in relation to the location of their club. Champions for Life was born from an agreement of collaboration between UNICEF’s Spanish Committee and the Professional Football Foundation that will last for the next three years. The money raised will be given to UNICEF in order to help children who have suffered from the typhoon in the Philippines, and the LFP’s social projects via its foundation.