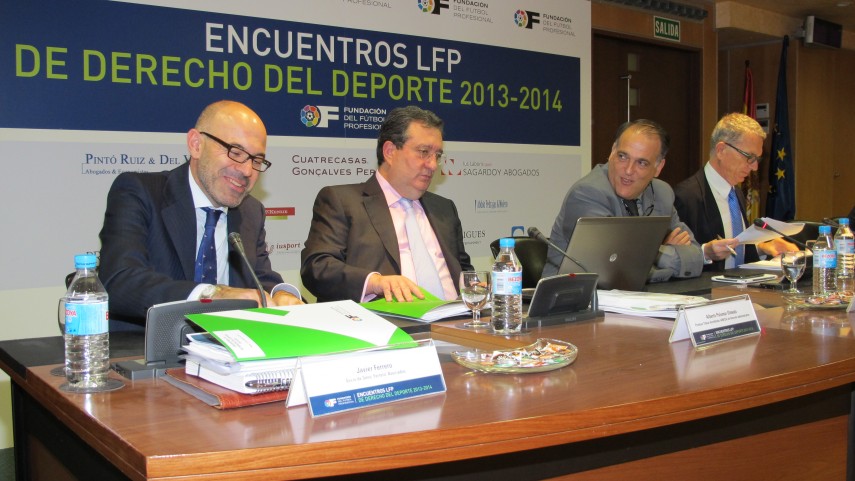 The forum, which took place in the headquarters of the LFP, analysed various issues relating to the current legal frameworks governing both domestic and international sport.

The third edition of the LFP Law and Sport Conference was a success. Led by Alberto Palomar, an Administrative Law professor and Sporting Law expert, and Antonio V. Sempere, of Gómez-Acebo & Pombo, the event was also attended by Javier Tebas, president of the Liga de Fútbol Profesional.
Alberto Palomar opened the forum by speaking about sporting licenses, among other things. Palomar warned of the risks involved with modifying the State’s Sporting Laws: "It could lead to competitive fraud", he explained. "With a unique licence, state and/or private, one can compete across Spain", he added.

Meanwhile, Antonio V. Sempere spoke about the crisis surrounding working conditions for professional athletes, the prevalence with which the Support Law is enacted upon by individuals, and the effect of internationalisation. Discussing the last topic, Sempere seemed "sceptical about its application to sport". He then analysed the problems in terms of applying bankruptcy laws and the rules set out by the Spanish Football Federation. He also discussed the remuneration received by Sporting Administrators. "Their wages should be included in the list of creditors", he concluded.

Javier Ferrero, from Senn Ferrero Sports & Entertainment, looked at things from a footballer’s perspective in terms of third party agreements, which can affect working relationships, using the summer’s ten most important transfers as a reference.

The last speech of the conference was given by José Ramón Lete Lasa, the General Sporting Secretary of Galicia. He spoke about regional sporting vision by making special reference to the exclusive jurisdiction held by Autonomous Communities. He explained the consequences of the current organisational model for sporting activity and emphasised the nature of private organisations, the federal monopoly, and the pyramidal structure of the organisation.