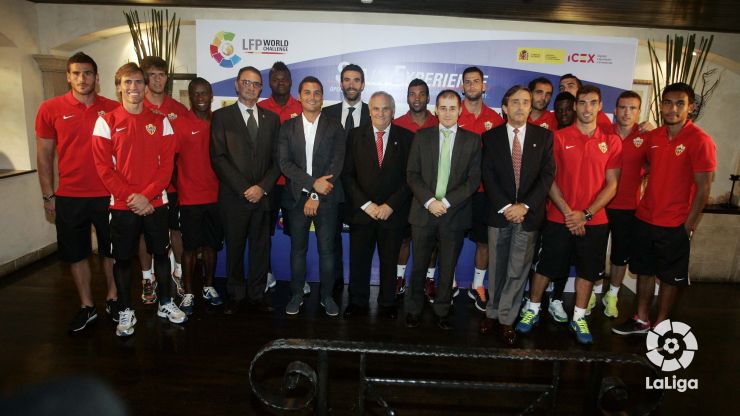 With motive of UD Almería's stay in Bangkok, a number of Spanish and local businesses met as the LFP World Challenge brought together Spanish football, economy and gastronomy.

The LFP World Challenge tour in Thailand continues to be a success, with the presence of UD Almería as representatives of the Liga de Fútbol Profesional. Wednesday saw the 'Spain Experience' event held, where large Spanish and local companies came together to learn about Spanish football and the Marca España, in Bangkok.

The Rembrandt Hotel in Bangkok was the location where Spanish sport, gastronomy and business took centre stage. In attendance were Fernando Sanz, LFP’s South East Asian ambassador and Alfonso García, president of the Andalusian club, together with the UD Almería first team squad. Also, the Spanish Embassy was well represented with Jose Luis Navales, minister for Tourism and Trade, and Chargé d’affaires Antonio Casado Rigalt. It is an event that the LFP and ICEX have set up, and which the board of Muangthong United FC, UD Almería’s opponent of Wednesday, did not want to miss, enjoying traditional Spanish food in an unbeatable atmosphere.

"It is a fundamental moment for the Spanish league in getting the LFP World Challenge, in which Spanish and local businesses will network, known. The LFP owes Spanish society for its loyal following, and for that we are trying to promote Marca España in the rest of the world", explained Fernando Sanz about the 'Spain Experience'. The LFP ambassador also added that they are “very surprised and delighted with the media attention that the Thai tour is attracting”.

The president of UD Almería, meanwhile, said "it is a very good opportunity for Spanish football to introduce itself to the Thai market of 60 million people. It is always good for Marca España to go abroad, and in this case it’s through football".

Jose Luis Navales, minister for Tourism and Trade at the Spanish Embassy in Thailand, made a positive summary and expressed his delight at the success of the LFP World Challenge. "Football is entertainment and fun, but it also generates investment that have an enormous effect on our image. We think that something like this benefits the image of Spain and its businesses", said the diplomat.

Finally, Antonio Casado Rigalt considered this a favourable opportunity for the Thai people to be able to know more about the Spanish culture and economy. "We are far away, in a very different culture, where Marca España needs to be promoted. 90% of Thais associate our country with football, and therefore there's no better way to promote Spanish products than with the Spanish league", said the embassy's Chargé d’affaires.