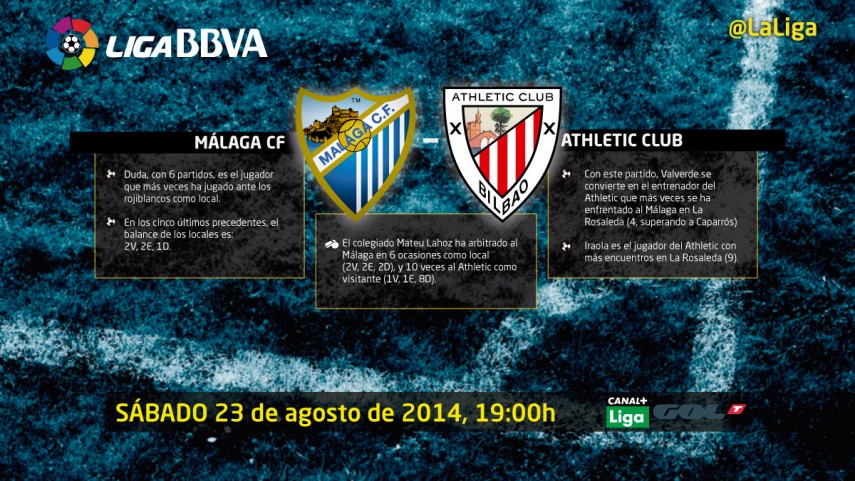 The Rosaleda lifts the curtain on the 2014-15 season

Málaga and Athletic will get the Liga BBVA underway. Ochoa will be tasked with stopping a Rojiblanco team who are coming off the back of a European qualifying game.

Athletic Club's visit to La Rosaleda presents a perfect opportunity for Málaga CF to hit the ground running in a new season with their star signing, 'Memo' Ochoa. The Rojiblancos, who have just been fighting for their place in the UEFA Champions League, in San Paolo, will have to overcome any possible fatigue.

In the list of 19 men produced by the manager, Javier Gracia, the names of academy players Juanmi, Juanpi and Samu Castillejo stand out. Miguel Torres, who recently joined the club, was left out of the squad. At Athletic, it seems that striker Guillermo has won the confidence of Ernesto Valverde, who has put him back in the team for the first match of the season. On the other hand, Borja Viguera and Gaizka Toquero were left off the list.

Málaga’s manager understands that the team will have to try and control the game: "We have to dominate and not wait to see the form of Athletic. We are playing well, but it is something you have to demonstrate day by day". And he praised Ernesto Valverde’s side: "It is a team that has a lot of firepower, they don’t concede many and create a lot of danger from set-pieces".

Ernesto Valverde, for his part, spoke of the difficulty of the clash: "I think that tomorrow's game will be quick and intense. We are ready but Málaga have had a good preseason, they have travelled a lot and they will be a team to look out for. They are particularly dangerous in dead-ball situations".