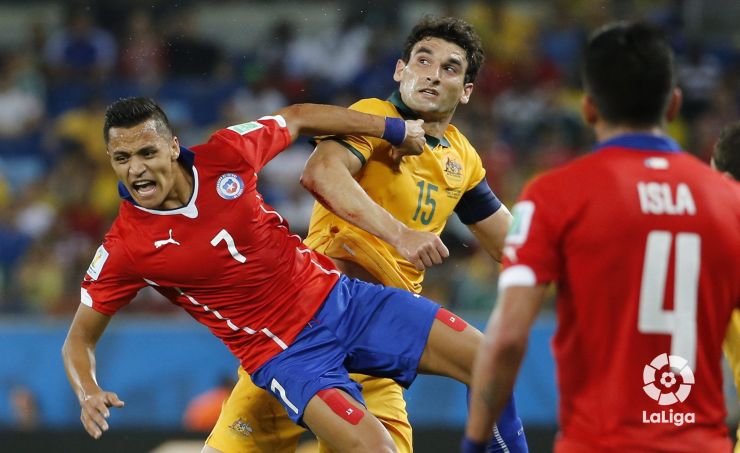 The Liga BBVA conquers the Maracanã

As many as 19 players who have competed in the last Liga BBVA season could take to the pitch in the Brazilian stadium in the Spain - Chile clash tonight.

The Estádio do Maracanã will host a vital match for Spain in the FIFA World Cup on Wednesday. Spain and Chile meet in their second group match and the two teams find themselves in different situations. Vicente del Bosque’s side will be bidding for their first win, while the Chileans are looking to progress after their win over Australia.

But it will also be a match on which the Liga BBVA will be leaving its mark. As many as 19 players who serve in the ranks of clubs in the Spanish championship will be present in the Estádio do Maracanã in Rio de Janeiro. 14 players from Spain and five from Chile will star in a match that will have a strong LFP presence.

Five 'Spaniards' for Chile
Five Chileans who were key figures in their respective teams in the 2013/14 season did more than enough to win their ticket to the World Cup finals. Sampaoli’s team has a distinct hint of the Mediterranean. Eduardo Vargas arrived in Valencia CF in the winter transfer window and has scored three goals in 17 matches in his time there. His quick adaptation to the Liga BBVA has made him one of Chile’s leaders. Beside him will be Alexis Sánchez, FC Barcelona’s striker, who could not have got off to a better start, finding the net and setting one up in his first match in Brazil.

Fabián Orellana, the RC Celta de Vigo winger who thoroughly deserves his spot in his national side, will also be there. Francisco 'Gato' Silva of CA Osasuna and Real Sociedad de Fútbol keeper Claudio Bravo complete the quintet of players who ply their trade in the Liga BBVA and will be representing Chile for the coming weeks.

Spain, a Liga BBVA side
The skeleton of the Spanish team is made up of Liga BBVA players. Fourteen Liga BBVA footballers make up Vicente del Bosque’s team in this World Cup. Their goal is to defend the title they won in South Africa four years ago.

Four players from Club Atlético de Madrid, the Liga BBVA champions this season, three from Real Madrid CF and seven from FC Barcelona make up the selection of Spain players who make their living in La Liga. All of them are key members of their respective teams and they form the backbone of Vicente del Bosque’s side, who will be hoping to forget their opener as they approach the match with Chile.