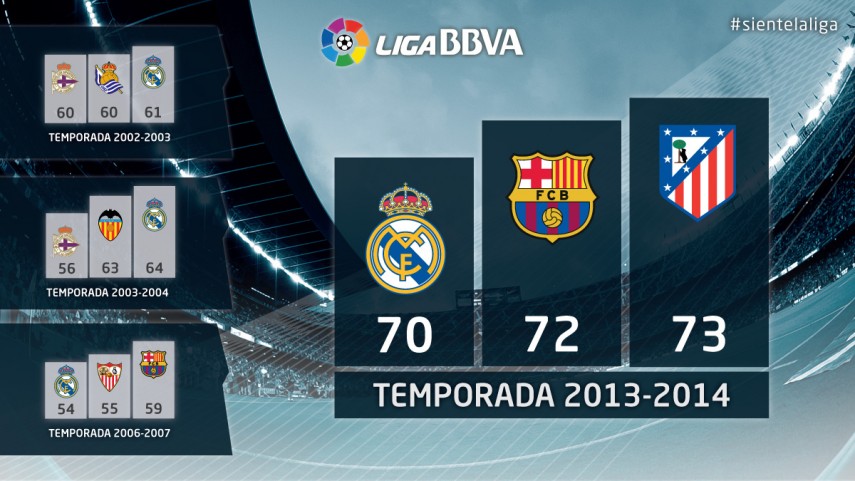 It has been over ten years since there was an end to a season as tight as this one: just three points separate the top three sides, the smallest gap across the European leagues.

Young and old fans alike can barely remember a competition as close as this year’s Liga BBVA campaign. Atlético Madrid, Barcelona and Real Madrid have been playing musical chairs with the top spot for the last few matchdays, making the Spanish topflight the most exciting division in the world.

You have to go back eleven seasons to witness something similar happening at this stage of the year. It was during the 2002/03 season, when Deportivo de La Coruña and Real Sociedad were both one point behind Real Madrid and breathing down the Whites’ necks for the league title. This season, Diego Simeone, Gerardo Martino and Carlo Ancelotti have revolutionised the championship with their tactics and fans have been kept on the edge of their seats week in week out.

Atlético, the current Liga BBVA leaders with 73 points, will approach the nine remaining games as if they were nine finals, in a bid to be crowned champions for the first time in 18 years. But sitting just behind them is Barcelona who, after winning El Clásico and then seeing Real Madrid lost 2-1 to Sevilla, now occupy second place with 71 points and are still very much in the title race. The Whites, meanwhile, have slipped down to third with 70 points, but will be looking right over the other two sides’ shoulders right until the last matchday of the season, which just so happens to include a clash between the Catalans and the Red and Whites.

The tightest league in Europe

The drama in the Liga BBVA has not gone unnoticed outside of Spain. The English Premier League, the German Bundesliga, Serie A in Italy, Ligue 1 in France nor the Dutch Eredivisie have not come close to matching the levels of excitement on offer in Spain, a country that can boast having the tightest league on the continent, one in which only three points separate the top three sides. On top of that, Barcelona and Real Madrid are the highest scoring clubs in Europe. The Catalans have scored 88 goals, while the Whites have found the back of the net on 81 occasions in the domestic competition this season. Liverpool is the only other team to have surpassed 80 goals in the league this season, with the Merseyside outfit racking up 84 so far.

The most thrilling relegation fight

However, it is not just at the top of the table where all the excitement can be found. Results from the last two matchdays have turned the Liga BBVA, along with the English Premier League, into the most tightly contested leagues on the Old Continent in terms of the battles for safety. There are eight points separating the bottom five sides, which points to there being a tense and anxiety-filled season finale which will go down in the Spanish and world football history books.