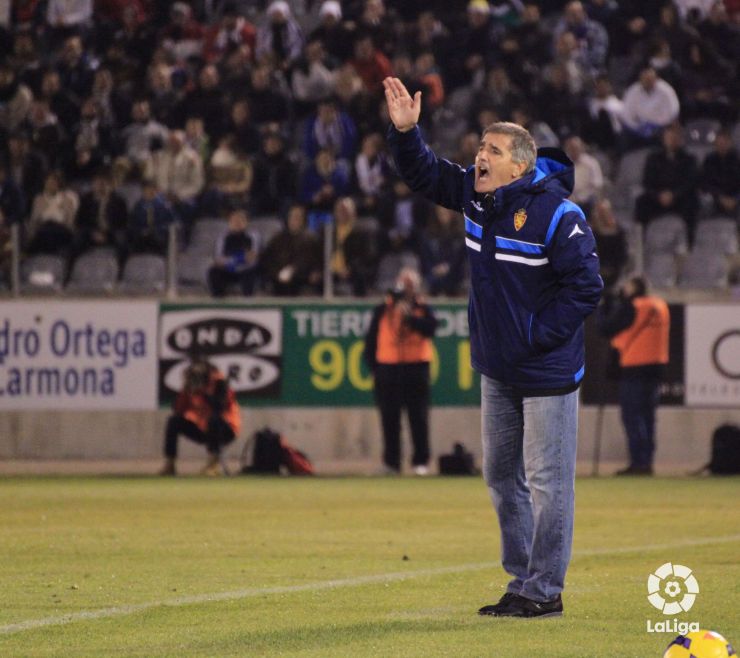 "The Liga Adelante is looking even tighter"

Paco Herrera is charged with returning Real Zaragoza to the Liga BBVA, and he analysed the team and the competitiveness of the division for LFP.es.

Last summer Paco Herrera (2/12/1953, Barcelona) became the man responsible for taking Real Zaragoza back to the Liga BBVA. The ninth best team in the history of the Liga BBVA is now in the Liga Adelante, fighting for promotion. Nobody can question the experience of the man pulling the strings as he is the manager with the most Liga Adelante matches under his belt. Herrera spoke to the LFP.esabout the club from Aragon, the divisionand his experiences since he took the reins at CD Badajoz in the Liga Adelante in the 1992/93 season.

LFP.es: How do you see Real Zaragoza? It is one of the great teams, but it needs a lift.           Paco Herrera: Let me tell you about how I felt when I arrived at my last club [RC Celta de Vigo]. It was a club whose goal was to win promotion no matter what, but it had tried unsuccessfully for several seasons. My goal is for that not to happen to me at Real Zaragoza, I want to get that promotion. When such a big team goes down it is quite complicated to fix things.

My goal is for that not to happen to me at Real Zaragoza, I want to get that promotion. When such a big team goes down it is quite complicated to fix things.

LFP.es: Does the fact that the word 'promotion' is on everybody's minds add pressure?
Paco Herrera: Yes, at the moment it is the only plan. I am not going to change that. In the first year nobody appreciates the situation we are in or makes a realistic analysis of our position, but I accept it and I am trying to achieve that goal. I have been through very difficult patches, but I am have no doubt that teams who have been through hardship come out stronger on the other side.

LFP.es: Let's talk about Tarsi and Diego Rico, some of your up-coming players. How much potential do they have?
Paco Herrera: If there is one thing I am proud of, it is that all the clubs I have been at have really delved into their youth academies. This has thrown up Rico, who is putting in some great performances, and Tarsi, who was in the youth team last year, and I would say both of them are mature enough to be in the starting line-up. But there are also others who will be there soon: Pablo Alcolea, Óscar Whalley, Anton Shvets, Jorge Ortíand Diego Suárez.

LFP.es: You can see how close the division is by the fact that if you win three matches you move up to the top end of the table, whereas if the opposite happens you are in the danger zone.
Paco Herrera: This year the situation is even more extreme. Normally there is a team who stands out at the top and another at the bottom, but that is not happening this year. So the Liga Adelante is looking even tighter.

LFP.es: You won promotion in your second season at Celta having fallen to Granada CF in a penalty shootout in the playoff semi-finals the previous year.
Paco Herrera: That was a huge blow. Even more so as it came on the last penalty. It was a very close-knit dressing room and I think that helped in the second year. They were even tighter when we won promotion.

LFP.es: Throughout your career you have managed names such as Jesús Perera, Ángel Dealbert, Leonardo Ulloa, Mario Gaspar, Iago Aspas…
Paco Herrera: I am very proud to see how they are progressing. I would say I still keep in touch with about 90 per cent of that list, because in many cases they are players who made their debut with me. I had Perera at Badajoz in the Tercera División, he came up with me, made his debut under me and I later took him with me to Albacete. Not long ago, Óscar De Paula, who made his debut with me at 18 years of age, told me that I was a sporting father to a lot of players. There is no greater satisfaction in football than giving a debut to a young player who then goes on to shine.