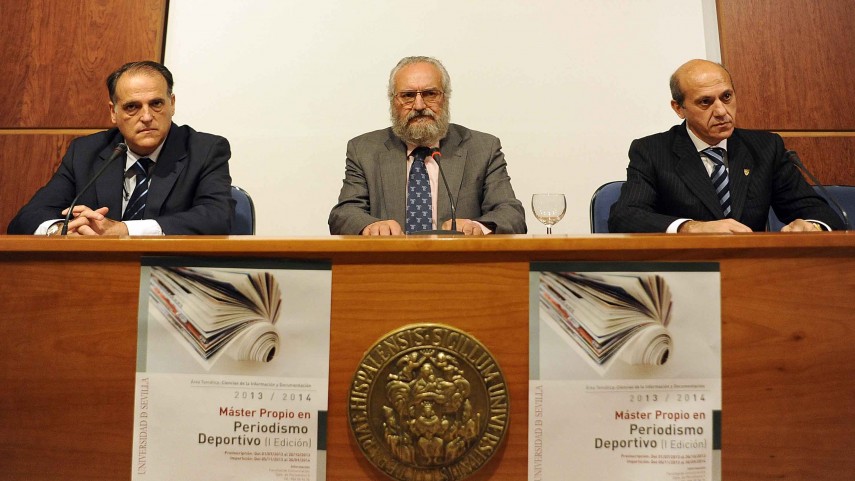 The LFP travels to the University of Seville

The president of the Liga de Fútbol Profesional, Javier Tebas, was invited to attend the inauguration of the Sports Journalism masters course in the University of Sevilla. In a conference given to the faculty’s students, he explained the financial situation facing Spanish football clubs and the work the LFP is carrying out.

Not taking Barcelona and Real Madrid into account, "which distort the reality within the sector", the current debt of clubs is €2.7 billion, while revenue stand at €1 billion. Thanks to a tight system of financial control, the LFP now decides the amount of money each club can spend on new signings. Javier Tebas pointed out that "the objective over the next three seasons is to lower the amount of debt owed by Spanish clubs to between €1.9 billion and €2 billion". Tebas cited Real Betis as an example of a club “with more than acceptable finances to continue competing”.

The LFP president insisted that now is the time to fight against the fraud committed against the television operators. He highlighted the importance of tackling piracy, which is estimated to cost la liga €110 million in lost earnings. "To treat a goal as a right of information makes the league less competitive. That only occurs in Spain". In that respect, it is necessary to increase the amount of prepaid subscribers. "There are 11 million subscribers in England, and only 3 million in Spain. That is a crucial difference in terms of the media rights deal".

Liga World Challenge
Javier Tebas assured that Spanish football "has a long way to go". The international expansion of the league should not only focus on the Barcelona and Real Madrid brands. The league is working towards expanding the profile of other clubs internationally and tomorrow the LFP Assembly will present the Liga World Challenge, an entrepreneurial project supported by the Spanish government which will help promote Liga BBVA clubs internationally.