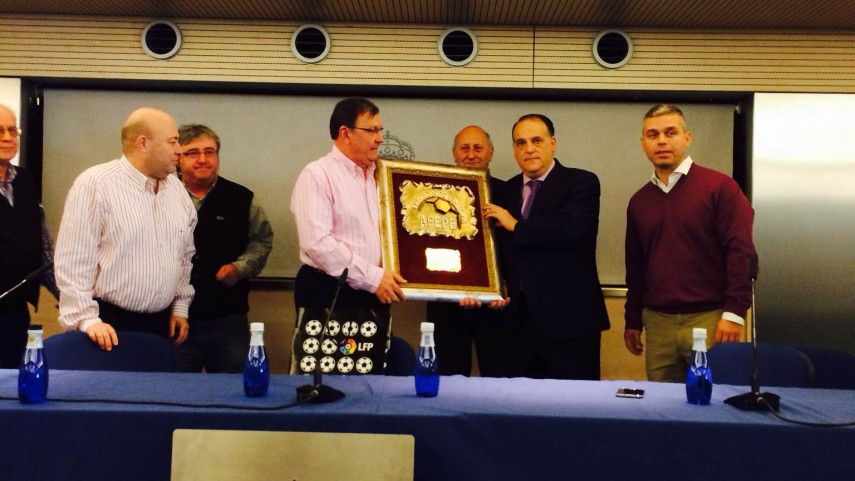 The LFP partakes in the fifth Spanish Fan Club Federationseminar

The meeting covered topics like the price of season tickets, the new system of financial controls and the efforts to quell violence in stadiums, among other things.

The Spanish Fan Club Federation, along with the Liga BBVA, the LigaAdelante and the Liga de Fútbol Profesional(LFP) discussed the current state of football in the Santiago Bernabéu on Saturday, and proceedings drew to a close with the signing of agreement between the two entities.

President of the LFP, Javier Tebas, spoke of the progress made in terms of season ticket prices, which have dropped significantly - by 15% to 30% - meaning that the number of season ticket holders has been able to remain the same this season.

As for the new system of financial control established by the LFP, Tebas declared that "with clubs now having to work within the bounds of the spending restrictions on new signings, we have managed to reduce the amount of debt in Spanish football by €300 million". As a result, the same approach will be taken during the winter transfer market to ensure the financial sustainability within the sector.

The LFP head also spoke about the newly adopted initiatives to tackle match-fixing and piracy. "A new department has been created within the LFP for which we have contracted a number of companies to help fight against fraud caused by illegal gambling", Tebas announced.

To finish off, he spoke about efforts to put an end to violence at football grounds, a topic which concerns clubs and fans alike. "The LFP has a zero tolerance approach to racist chants, banners or demonstrations and will hold club officials accountable. We will not accept this behaviour and will take the appropriate action as we have done in the past", the LFP president concluded.