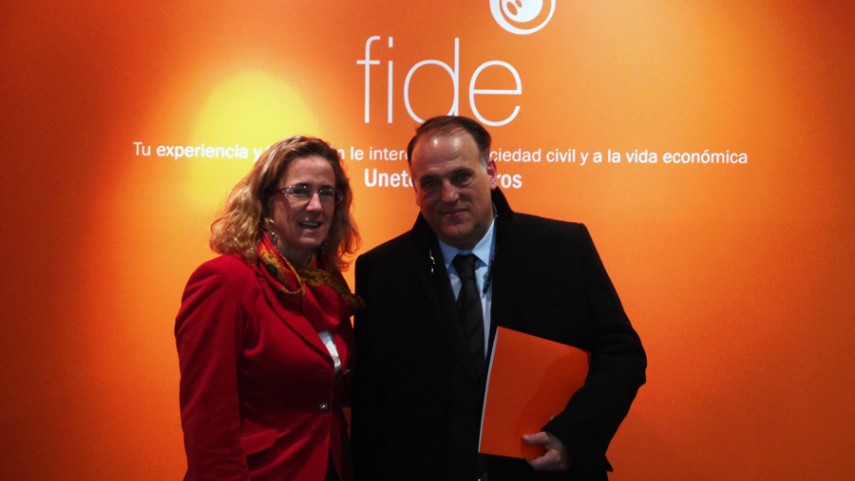 The LFP continues the fight against sporting fraud

Javier Tebas visited the Foundation for the Investigation of Law and Business (FIDE), and explained the lines of work that the LFP is currently undertaking against sporting fraud.

The president of the Liga de Fútbol Profesional took part in a meeting with experts in sports law where they analysed the integrity of sport and the fight against match fixing. Javier Tebas introduced the topic by explaining that "it is the biggest problem sport has on both a national and international level".

According to the Liga de Fútbol Profesional there are several different forms of fraudulent betting in sport. "When we talk about illegal sports betting, we don’t just talk about changing the results. There are more than 150 bets possible for every game", said Tebas. "It is a very serious problem".

Javier Tebas also disclosed that the percentage according to UEFA and FIFA of matches that are fixed "is 1%", adding "at the LFP we monitor 500 cases of betting and we collaborate with players, and by doing so we think this percentage could be smaller".

The Liga de Fútbol Profesional has been working for a number of years now to eradicate criminal conduct with regards to match fixing. In doing so, they have presented a proposal to modify an article in the Penal Code. "Only professional football and basketball are regulated in Spain, but other sports or European competitions disputed in our country don’t fall within this article, and for that we have asked it to be changed", said Tebas.

The Liga de Fútbol Profesional’s proposal is: "The article be extended to all participants in all competition, so that they are all liable to the same punishment, and that European competition is also affected, even though they aren’t under the jurisdiction of the national governing body". The president continued by saying that "this will help us to fight against this enormous problem".

"In Europe they have detected that organised criminals are acting in the world of betting. We have a major problem and we the law to give us a solution", concluded Tebas.