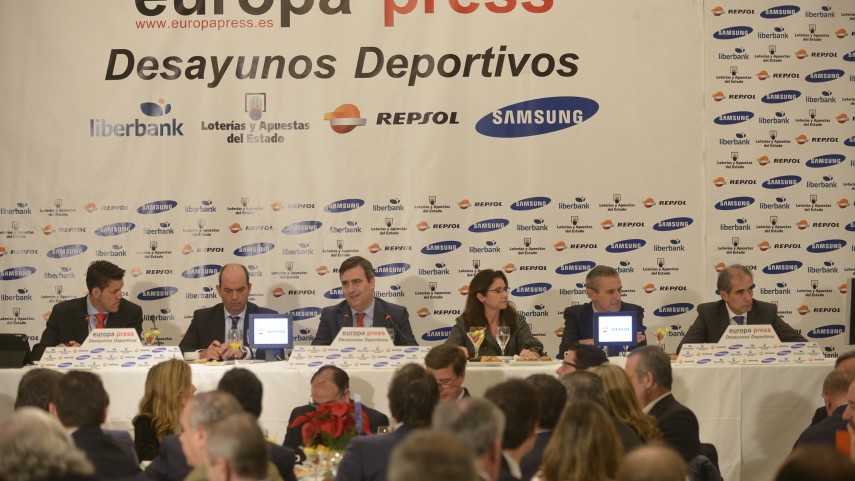 Miguel Cardenal, the State Secretary for Sport, shared his vision on several issues that affect Spanish sport. The president of the LFP, Javier Tebas, was in attendance.

The State Secretary for Sport, Miguel Cardenal, took part in a working breakfast organised by Europa Press, which was attended by the president of the Liga de Fútbol Profesional, Javier Tebas, as well as a host of other names from the world of football, such as Florentino Pérez, the president of Real Madrid CF, and Miguel Ángel Gil Marín, the managing director of Club Atlético de Madrid.

Cardenal responded to questions on a variety of subjects, including those relating to the new sports law. Miguel Ángel Gil Marín questioned the State Secretary on the joint selling of audiovisual rights. Cardenal explained that "we would have liked the draft legislation to have been formally introduced, and in the first quarter of 2014 it will come into force". He also added that "it includes the obligation to cover the objectives that have been set out for the sale of television rights".

The president of the Superior Sports Council indicated that the objectives are "their peaceful enjoyment, the existence of marketing formulae to prevent anything we believe to be negative for companies and for football, and a consensus between Spanish football and our society". He also spoke of his conviction that "in the distribution of the television rights, those who charge the most and the least most be brought closer together".

The head of Real Madrid CF, Florentino Pérez, also offered his opinion on the distribution of television rights. Pérez said that "Real Madrid's stance is clear, we have to reach an agreement on distribution".  In terms of the marketing formula he indicated that "it should be whichever generates more money for the group and we are always in agreement with that".

Regarding the European Union's investigation he stressed that "there is no payment plan between the clubs and the Tax Authorities, there is a tax legislation that applies equally to all football clubs and SADs (public limited sports companies), as there is in any economic sector, and there is no special plan, what needs to be investigated in any case is the Spanish legislation". Miguel Cardenal claimed to be "very disappointed" and added that "the image of the sport and of Spanish football has been seriously damaged".

The president of the LFP, Javier Tebas, also spoke on the subject: "Doubt has been cast over Spanish football because of its success, which indicates that there may be assistance where there isn't any", he told Europa Press. "The European Union is bound to make sure that competitions are in line with the law. And the fact that an investigation is underway does not mean anything", stated Tebas.