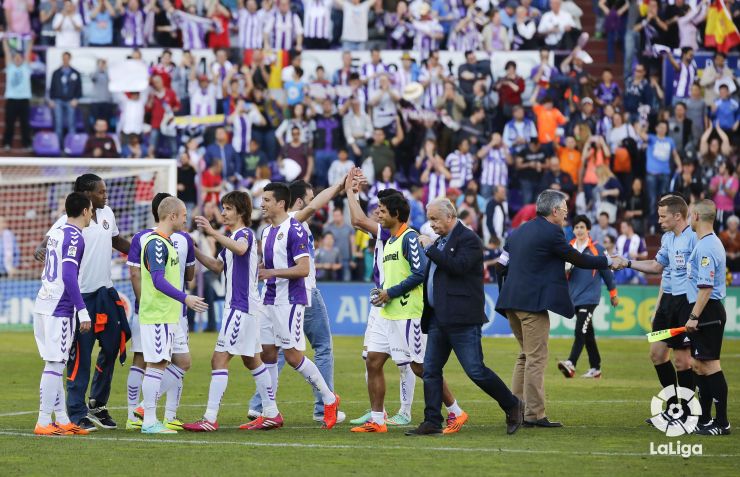 The José Zorrilla, an arena of dreams

Real Valladolid has not lost at home since November 22 of last year, a key to the Castile and León outfit moving out of the relegation zone.

Real Valladolid have plenty of fight left in them for what remains of this exciting Liga BBVA season. The Castile and León side has a lot of reasons to be hopeful of staying in the Spanish topflight for another year. The most important of which is the team’s spectacular run of form in the José Zorrilla.

The Valladolid stadium has become a fortress in the last few months. With Sunday’s win against Almería, which came courtesy of an early Manucho goal, the Pucela has now gone eight straight games unbeaten at home - a run of form that has allowed the team to climb out of the relegation zone with seven games to go (17th with 30 points).

You have to go back to November 22 of last year to find their last defeat on home soil, and go back over a decade, to 2002, to find a similar streak of form in the Zorrilla. Since losing 1-0 to Osasuna four months ago, Juan Ignacio Martínez’s men have picked up four wins and four draws that have been hugely important to their chances of staying up. While Real Betis Balompié (0-0), Elche (2-2), Levante (1-1) and Rayo Vallecano (1-1) were able to leave Castile and León with a point each, top quality opposition like Celta Vigo (3-0), Villarreal (1-0) and Barcelona (1-0) have been made to leave the Zorrilla empty handed.

One of the key ingredients to the team’s good form at home is Javi Guerra. The striker has scored four times during these eight games. On top of that, the Malaga native is one of the top scorers in the division with 13 goals. A lot of the hopes will be pinned on Guerra ahead of the seven matches that remain this season, and the Valladolid faithful will be dreaming that their team extends its strong run of form at home during the last four games in the Zorrilla.