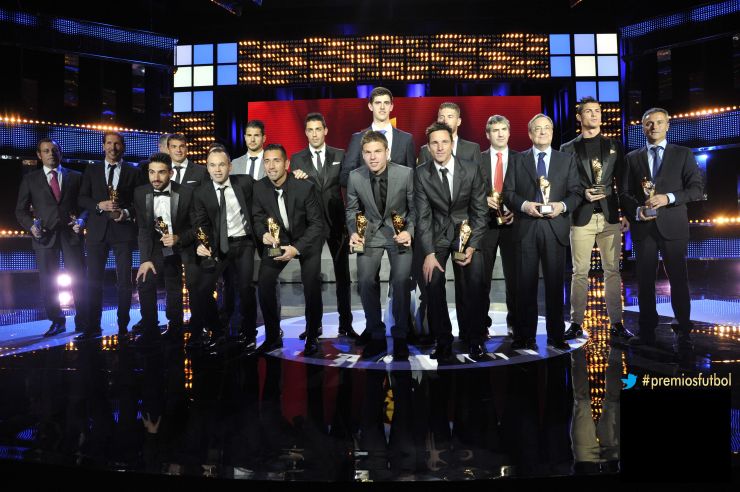 The LFP Awards Ceremony brought together all the Liga BBVA and Liga Adelante clubs in an unforgettable night for Spanish football.

It was a night that Spanish football will remember for some time to come. The whole Liga de Fútbol Profesional family came together, as LFP president Javier Tebas said, to celebrate the fact that "together we make the best league in the world". The president, before closing the grand LFP Awards Ceremony, thanked the 42 Liga BBVA and Liga Adelante clubs, their presidents, board members and footballers for their help in continuing to be the best.

The night opened with images of the best Liga BBVA and Liga Adelante players, and ended with one of the most important Liga BBVA players on the stage. Real Madrid CF striker Cristiano Ronaldo received the Most Valuable Player Award from José Ignacio Wert, the Minister of Education, Culture and Sport. The Portuguese forward is, according to objective statistics from 'mediacoach' the most important player for his club, which is why he received the award.

Berta Collado, the exceptional mistress of ceremonies, presented all the stars of Spanish football and made the fiesta an unforgettable event. The ceremony was certainly not short on humour, and there was also time to remember that our LFP superstars were once kids. Images of Andrés Iniesta at an age when he would have just started of dreaming of a life in football, a smiling Sergio Ramos and a Cristiano Ronaldo with his first football kit all brought a smile to the faces of the Liga BBVA players.

Luis Rubiales, president of the Asociación de Futbolistas Españoles, was responsible for opening the prize giving. Courtois and Esteban were the first to take to the stage to collect their Best Liga BBVA and Adelante Awards. The second prize brought with it an amusing anecdote as Sergio Ramos mistakenly collected Edu Albacar's trophy. They were chosen as the Best Liga BBVA and Liga Adelante Defenders, respectively.

Integrity, strength and teamwork are just some of the virtues we expect of all of our sportsmen and they are the main values taken into consideration when selecting the winners of some of the night's most important awards. Francisco González, president of the BBVA, presented awards to Iker Casillas, Bruno Soriano, Athletic Club and Villarreal CF for Fair Play.
One of the largest ovations of the night came for the Spanish women's waterpolo team, one of Spanish sport's true breakthrough teams in 2013. All of them presented the second award of the night to Asier Illarramendi for Liga BBVA Breakthrough Player, a double-winner, who took the opportunity to thank the team where he learnt his trade, Real Sociedad de Fútbol.

From the pitch to the dressing room, the awards for the Best Liga BBVA and Liga Adelante Coach were presented by Ángel Cano, BBVA's managing director. Diego Pablo Simeone, Atlético de Madrid's manager, who collected his first award as a coach in Europe and Fran Escribá, his counterpart at Elche CF in the Liga Adelante, were chosen by votes from players in both competitions.

Lionel Messi, who sent a message of thanks from Argentina where he is recovering from injury, received two of the night's most important awards: the Best Liga BBVA Player and Striker. A perfect ending to a wonderful ceremony that nobody was willing to miss.