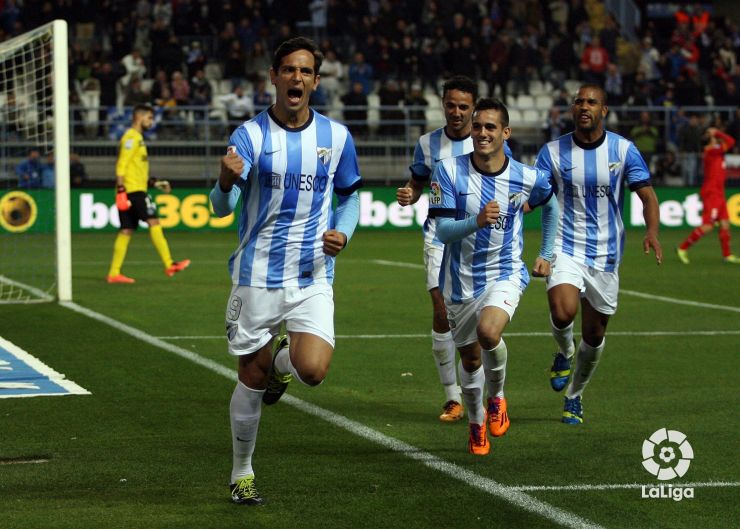 So far this season the striker has scored five goals that have given Málaga seven of the 26 points it has collected in the Liga BBVA.

Roque Santa Cruz has a smile back on his face after bringing an end to the goal-scoring drought he suffered for ten matches. Málaga CF's striker scored his first goal in 2014 in last Saturday's match against Real Valladolid CF (1-1) in the Liga BBVA.

It was a goal that brought with it an important point that keeps the Andalusian side three points above the relegation zone. In addition, the five goals the Paraguayan has scored this season have provided seven of the 26 points the team has to its name, 25% of the blanquiazules' total.

At 6'3", everyone is well aware of the striker's ability to create danger in the air. In fact, his three goals against Real Betis Balompié, Getafe CF and Valladolid all came from headers that proved too powerful for the opposition's keeper.

Santa Cruz arrived at Málaga on loan from Manchester City FC last season. He had already made his debut in the Liga BBVA in the 2011/12 season with Betis, also on loan from the English team. His presence at the club from Malaga was a significant contributor to the Andalusian outfit's sixth-position finish. The Paraguayan was one of the team's top scorers with a total of eight goals, equalling Javier Saviola and beaten only by Isco Alarcón, now a Real Madrid CF player, with nine.

In addition, the experienced footballer's eye for goal is will long live on in the memories of Paraguayan football. He is the top goal-scorer for his national team with 28 goals in the 91 matches he has played with the senior side.