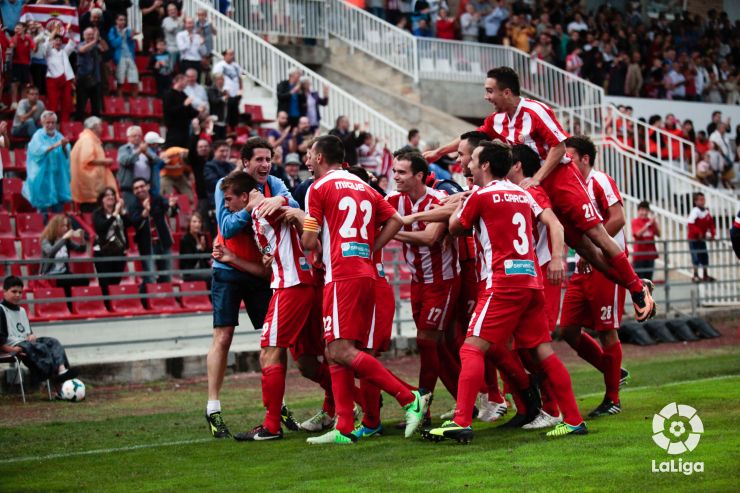 The exciting debut of Ortuño

The player from Murcia, who scored the goal that levelled things up in the last round of fixtures against Eibar, has created a great expectation after an incredible first outing.

"More happy than is possible". This is what Alfredo Ortuño, the new pearl of Girona CF, said following his debut in the last round of fixtures in Liga Adelante against SD Eibar. He has arrived and hit the heights straight away. The 23 year-old striker scored to level things up and earn a valuable point for the Catalan side.

It was the 55th minute when Ortuño came onto the pitch, and all eyes at the Estadio Municipal de Montilivi were on the youngster making his debut for Girona. The player from Murcia got involved and looked good before scoring.

The Basque side went ahead through Urko Vera, which forced the home side into action. Ortuño headed home a corner to level things up at 1-1 and put smiles back on the faces of the home fans. A perfect debut in his new side to go along with his excitement at returning to Liga Adelante.

The number 39, who signed for Granada CF last week from Hoya Lorca in Segunda División B, was immediately loaned to Javi López's side. It was between 2008 and 2011 that the forward tasted Liga Adelante action with Albacete Balompié.

The player's arrival has been a godsend to Girona, and with it comes big expectations for the club and their fans. The Catalan side currently sit in the relegation places with 25 points, and aren't in the best of form, although the Red and Whites faithful are confident that their side can maintain themselves in the division.