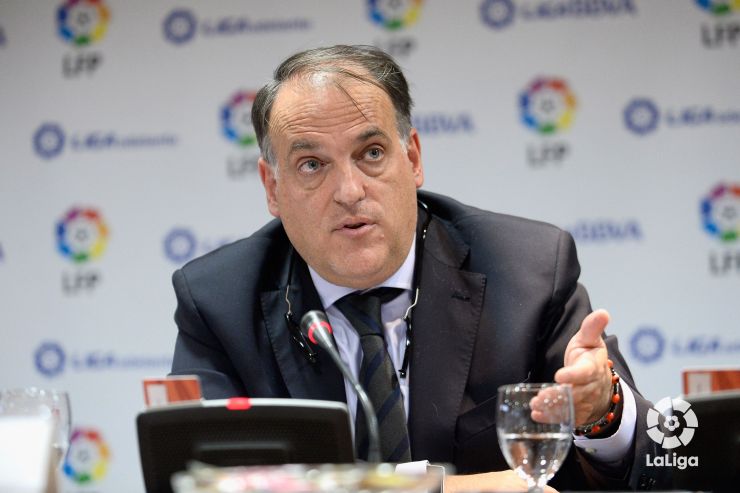 "The distribution of 22.3 million euros to the clubs shall be maintained"

The president of the LFP appeared before the media after the Ordinary and Extraordinary General Meeting at which the budget for the 2014/15 season was approved.

The president of the Liga de Fútbol Profesional, Javier Tebas, spoke to the press after the Ordinary and Extraordinary General Meeting that was held on Wednesday at the LFP headquarters in Madrid and stated that, "after approving the budgets for the 2014/15 season, the clubs shall maintain their share of 22.3 million euros".

This was one of the points that the clubs and SADs (Public Limited Sports Companies) from the Liga BBVA and Liga Adelante approved on Wednesday afternoon. In addition, according to the president, the green light was given to the sale of statistics to a betting company and the collective agreement previously signed by LFP and AFE was ratified.

Regarding the rest of the issues covered at the Meeting, Javier Tebas stated that "all the teams must comply with the regulations and the ratios proposed by the LFP", and insisted that, thanks to these measures, "Spanish clubs reduced their debt to 25% in the last year".

The president also gave a special mention to the great event that is occurring in Spanish football at the moment, the LFP World Challenge: "Through this initiative, we are creating value and internationalising Spanish football and Marca España. We help minority federations thanks to the Superior Sports Centre and the smallest clubs, thanks to Government support".

Tebas also revealed that the LFP hope that the LFP World Challenge continues to grow in coming years: "We have three editions planned and we want to carry out another three in order to grow Spanish football in the medium and long term".