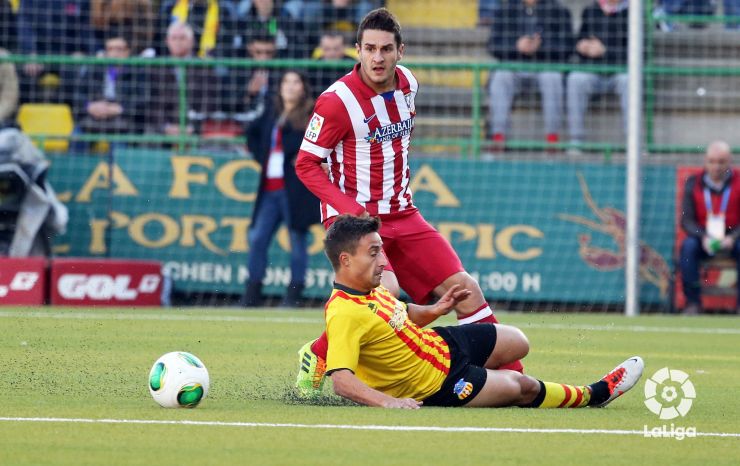 The champions get off to a flyer

Club Atlético de Madrid started its defence of the Copa del Rey in style with a 0-4 win over UE Sant Andreu in the first leg of the fourth round. Last year's runner-up in the competition, Real Madrid CF, could only muster 0-0 draw against CD Olímpic de Xátiva. In another of the stand-out matches, RC Celta de Vigo - Athletic Club,the Galician scored the only goal of the match, while Getafe CF rescued a draw on their visit to Girona FC, currently 18th in the Liga Adelante and Levante UD fell 1-0 to RC Recreativo de Huelva, the Liga Adelante's second-place team, with a goal from Ruymán Hernández on the final whistle.

Diego Simeone's men maintained their remarkably consistent 2013/14 form as they waltzed past Sant Andreu 0-4, with two goals in each half. Raúl García and Arda Turan made it 0-2 in the first 45 minutes, the Turkish international later added to his haul and David Villa put the icing on the cake as he found the net in the dying minutes.

Real Madrid drew with Olímpic de Xàtiva in a match which threw up few chances and in which the home team, from the Segunda División B, kept a clean sheet and can keep their heads held high for the return match. Celta beat Athletic 1-0 in the only all-Liga BBVA tie. It was a very entertaining first-leg clash in which Santi Mina, who was celebrating his 18th birthday, scored the only goal of the game when he pounced on a fumbled clearance from Carlos Gurpegi en in the 71st minute and managed to beat Iago Herrerín the second time around.

Getafe drew one all in the Estadio Municipal de Montilivi after David Timor gave the Liga Adelante side the lead with a wonderful free kick. But Ciprian Marica was not to be outdone and equalised with an over-head kick. Finally, Levante lost 1-0 to Recreativo en Huelva in a game that was decided in the 90th minute when Ruymán found the net.