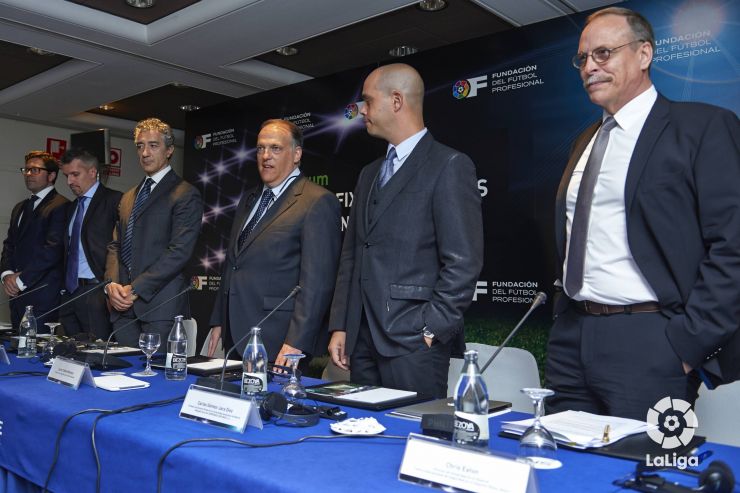 Today Valencia played host to the 'Match Fixing, Gambling and Organised Crime Forum'. The event, which was conceived and organised by the Fundación de la Liga de Fútbol Profesional, provided a forum to search for solutions to gambling fraud and match-fixing in football.

The president of the Liga de Fútbol Profesional, Javier Tebas, was responsible for opening the forum. Tebas reminded those present that, since he began as president of the LFP, his "number one goal has been the fight against match fixing". In this sense, the president of the LFP highlighted that, so far, "our league is the most advanced in the world in terms of monitoring this type of fraud".

Before presenting Manuel Quintanar, director of the LFP's Department of Integrity and moderator of the forum, Javier Tebas announced the creation of a clubs commission for monitoring fraud. The commission will be headed by Joaquim Boadas, ex-president of Girona CF, who Tebas wanted to thank for "daring to decry match fraud".

After the opening of the forum, Manuel Quintanar made way for Carlos Gómez-Jara, a criminal law professor from UCM, lawyer and member of CORPORATE DEFENSE, S.L. Gómez-Jara proposed that the clubs include anti-corruption programmes as a mandatory requirement to be able to compete in the league.

Gómez-Jara reminded those present that "since 2010 legal persons have had responsibility under criminal law, therefore it would be logical to oblige the clubs to include anti-corruption programmes in order to be able to compete".

Gómez-Jara was followed by the Italian Francesco Baranca, Secretary-General of FederBet. To him, understanding the problem of match fixing is vital in order to know how to eradicate it. "I have always compared match fixing to a virus that is everywhere and continues to spread", he said.

Baranca explained the various systems for detecting the manipulation of football games through gambling. According to him, the preventative information makes the odds before and during matches fluctuate. Thus, "there is no logical correlation between the reality and the increase in the odds of the bets". By way of example, the Italian put forward several cases in which a betting trend had clearly flagged the fixing of various football matches: Atalanta Piacenza (Serie A) and other cases in the Welsh league.

Baranca warned that the mafia networks that have taken control of this kind of fraud are organised criminals and, therefore, they not only commit economic crimes, but that there have been cases in which people have been physically attacked. He added that "between 30 and 40 matches are fixed every week. The problem is similar to that of drugs, but in this case it takes away from the spectacle and the mafias make money from it".

Finally, the Secretary-General of FederBet encouraged clubs to bring in preventative monitoring systems and indicated that "in the Spanish league, so far this season, we have not detected any cases of match fixing. But now we are coming into a period of the championship that is particularly susceptible to fraud, so investigation should be intensified".

The third speaker of the afternoon was Chris Eaton, director of Integrity in Sport from the International Centre for Sport Security. Eaton encouraged the clubs and sports companies to take the initiative in the persecution of this type of fraud by publically denouncing the offenders. To him "the new policies and regulations for persecuting this fraud are not capable of keeping up with the rate of development of the corruption. The sport cannot monitor these networks, but it must demand politicians and security forces to persecute it". Eaton relied on the use of videos and recordings in his speech in which players, referees and agents could be seen negotiating the corruption of matches.

The Australian pointed to "South East Asia as the largest of the 15 sports betting markets. Some illegal markets are set up and taken down on the same day. An increasing number of criminal networks are infiltrating the football clubs and referees".

The final speaker was Tribunal Prosecutor from Bari Ciro Angelillis. In his speech, the Italian explained his experience of the persecution of crimes in the fixing of football matches in Italy and spoke of 3 large problems: "The first is that the law still does not consider sports fraud to be a serious crime; the second is that the regulations do not include all cases of sports fraud and often it only occurs when money is on offer; and finally, an absence of tools for the investigation and persecution of these crimes".

For the fight against this scourge, Angelillis provided some fundamental ideas: "to start, each club should be linked to an agency that monitors the flow of betting and reports to the competent authorities and bodies; in addition, the prosecuting attorney should be clear that the clubs must teach and inform their players, as young men are often very easily influenced or tempted by shady people".