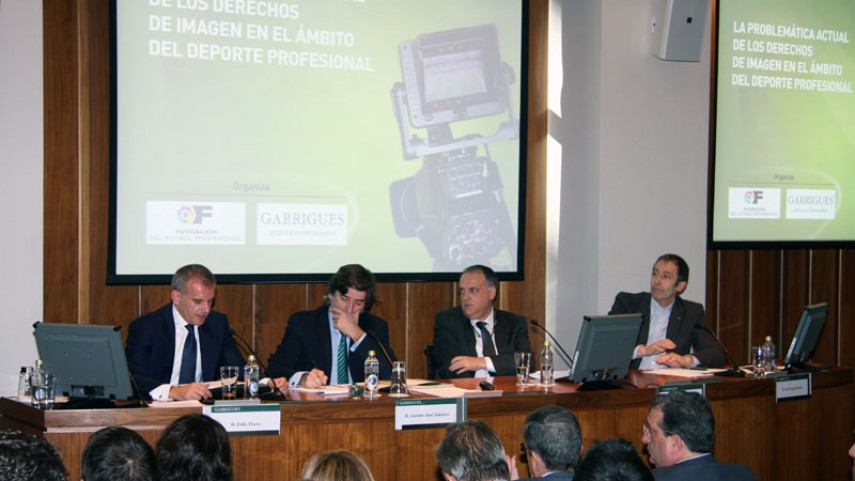 "Sportsmen are sometimes simpler than unions"

This is how Javier Tebas referred to the unions at the Image Rights Day, where he also spoke on other subjects such as the transfer of sportsmen's image rights.

The president of the Liga de Fútbol Profesional (LFP), Javier Tebas, took part in the debate on the'Commercial use of images of sports events and competitions' as part of theImage Rights Day organised by the Fundación del Fútbol Profesional and Garrigues Sports & Entertainment.

One of the main subjects discussed was the sportsmen's transfer ofimage rights to their clubs. Tebas stated that "elaborating the theory on how far image rights go in a working relationship is complicated. You cannot generalise and even less so in professional football because of the varying interests of the players at different clubs". "When players are linked to commercial brands the commercial use of images has to be shared with the club", explained the president of the LFP.

On the same issue, José Luis Llorente, president of the Asociación Baloncestistas Profesionales, noted that "the limits are not clear but that is what contracts are for, through them sportsmen can transfer their image rights. When it comes to writing the clauses you have to be as detailed as possible".

Specifically, the head of the LFP made reference to the work of the associations, stating that "sportsmen are sometimes simpler than unions". Tebas considers that the "LFP, and therefore the clubs, has the collective rights of the players, as they transfer them in practically all cases". In this sense, Tebas stated that the unions "sometimes make problems where there are none" and reiterated that the players nearly always transfer their rights to the clubs.

Finally, Alejandro Blanco, the president of the Comité Olímpico Español, brought the curtain down on the Image Rights Day, calling it a "great success" and congratulated the organisers, Garrigues Sports & Entertainment and the Fundación de Fútbol Profesional, for whom he had the following words: "The LFP is doing some great work with its sportsmen and it is doing increasingly more to benefit its associates".