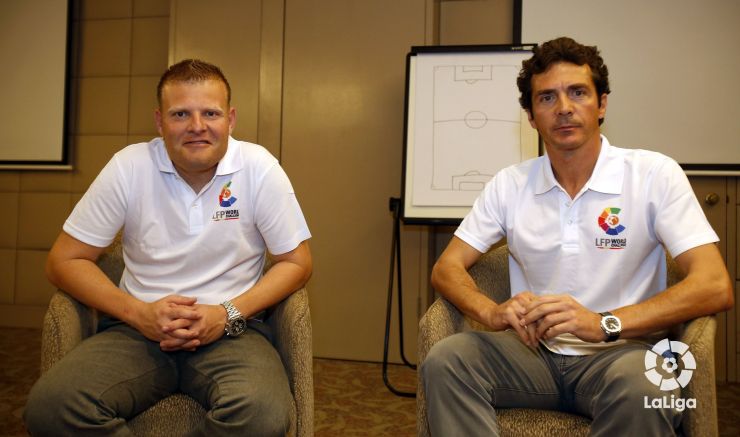 Josep Gombau, Adelaide’s coach, spoke to LaLigaTV alongside his new partner in crime, Guillermo Amor. Neither of them were in any doubt about the importance of initiatives such as the LFP World Challenge Tour for the development of football.

After Málaga CF's match on the Second LFP World Challenge Tour, the manager of Adelaide United FC, the Andalusians' first opponent down under, spoke to LFP.es alongside his new sidekick, ex-FC Barcelona and Villarreal CF player Guillermo Amor.

Josep Gombau, the Australian side’s coach, wanted to tell Spanish football fans about the situation in Oceanic football. "I think Australian football is very competitive, it is a very strong league. Football is really growing in Asia and Oceania, and an example of that is that Australia has participated in the last three FIFA World Cups. Football here is increasingly European".

The Catalan coach, who learned his trade in the lower ranks of Barça, also painted us a picture of Australian football. "First and foremost, Australian footballers are athletes. There are times in a training session when players ask to do more physically, and I tell them that we have to run with the ball, not after the ball", said Gombau, who is about to embark on his second season in Australia.

In addition, Gombau wanted to make clear the importance of ideas like the LFP World Challenge Tour. "This kind of initiative really helps. Football is not the first sport in Australia, so this kind of tour really helps. Bringing and exporting this brand of football to other countries, in this case La Liga, brings a lot of fans to football. It's growing in there are an increasing number of children playing at school".

Gombau, a personal friend of Guillermo Amor, brought the ex-player to Adelaide to help him on his passionate challenge. "Josep offered me a chance to come here and discover all this, and I'd like to thank him for that. We have been friends for a long time. I’ve been here for two weeks and I still have a lot to learn. I am ready to learn about everything: the championship, the people, the country…", said the man from Benidorm. "Football is the number one sport everywhere, although perhaps it has had a harder time in Australia. Between us we are making it possible to move this forward", added Amor.

Finally, Gombau said that the expectations aroused by the game with Málaga are huge. "Spanish football's image in Australia is very good. This year they were able to follow the Spanish League on TV, and that has allowed fans here to get a taste of it. Just last Friday, there were more than 20,000 fans at the match against Málaga, very high attendance for a match here in Australia", concluded the Adelaide United coach.