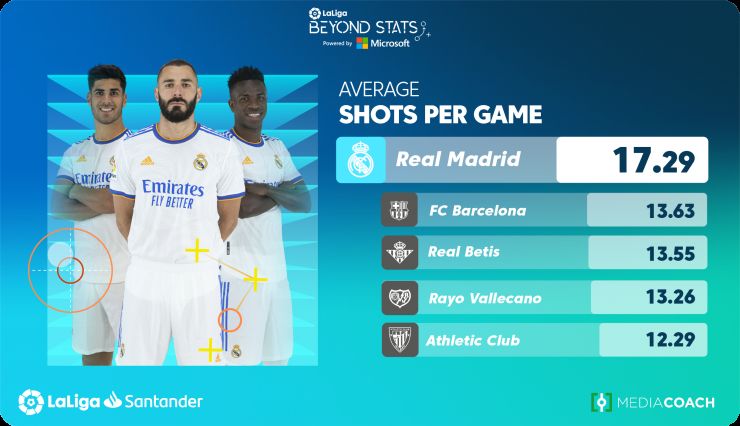 Shots under the microscope: a lot more than simply striking the ball

Shots are much more than a case of simply striking the ball. They are the possible and pursued outcome of an effective attacking phase of play. Shots can be analysed in many ways: where they take place, its' outcome, etc.

We begin in general terms, with the average number of shots per game which teams unleash. Real Madrid are LaLiga's most proficient shot-takers, topping this ranking with a total of 17 shots per game. This is no coincidence. Real Madrid's attacking phases last season were comprehensive and successful. They were the team with the most dangerous possessions, with the most players per possession, with the most passes per possession, the fastest to move the ball around, etc. Behind Los Blancos are Barcelona, Real Betis, Rayo Vallecano and Athletic Club.

Percentage of shots on target

We already know how many shots they take in total, but let's take a look at what percentage are goalbound. If we take this into account, Real Madrid continue to top the ranking with 39.4% of their shots on target. However, the rest of the table changes slightly with respect to the teams present in the previous one. Villarreal appear in second place with over 38.2%, despite only managing the seventh-highest number of shots taken. In other words, their effectiveness in front of goal is noteworthy. They are followed by Real Betis once again, Levante, who came ninth on shots overall, and Barcelona in fifth place.

We can see that the number of shots taken is not directly related, in this case, to the percentage of shots on target.

Having analysed the numbers and percentages, we now look at the yield, in terms of how many shots teams need to score. We come across two newcomers who had yet to form part of either of the previous rankings: Atletico Madrid, who take the top spot as the team requiring the fewest shots to score a goal, with 7.1, followed by Sevilla, in fourth place, with 8.1.

Villarreal are present in this ranking once again, with their effectiveness earning them a place on the list. We also find Barcelona, Sevilla and, yet again, Real Madrid.

This is an increasingly popular stat which allows us to measure the probability of a shot ending up in a goal, and therefore representing how dangerous a team's shots are. This ranking throws up some newcomers and, as you can see, creating dangerous chances does not mean that you score more, although it is a statistic that tends to even out over the course of the season. Real Sociedad are the team who produce the greatest threat per shot, followed by Levante, Villarreal, Atletico Madrid and Barcelona.

So far, we have talked about the culmination of the offensive phase: shots, their effectiveness and their yield. But to create them it is necessary to build up the play, and there are lots of ways of doing this. What is clear is that several of the teams we have seen above are also present in the following ranking:

Average passes in the final third

It is no coincidence that the teams who link up best in the danger zone are also the ones who unleash the most shots. However, Atletico Madrid, the team with the fewest shots per goal, are missing from the list, as are Athletic Club and Rayo Vallecano, who were two of the top five teams in terms of the number of shots. One of the clear differences and conclusions that we can draw is that both Rayo and Athletic are the two teams that put in the most crosses, and their shots come via this route too.

And so concludes our brief analysis of what happened last season in terms of shooting. Go deeper into the game with Microsoft and LaLiga on the LaLiga Beyond Stats platform.