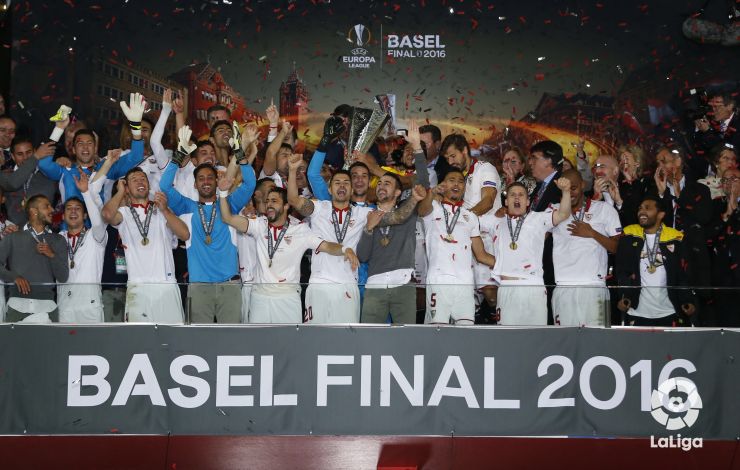 The Andalusian outfit's achievements in the UEFA Europa League have seen the club secure a place in the Guinness World Records book.

Sevilla FC have made their way into the Guinness World Records book, a feat achieved as a result of the club lifting their third successive UEFA Europa League crown. Sevilla's European triumphs have seen the Andalusian outfit become the side to have claimed the most UEFA Europa League titles, with five, as well as taking the record for the most consecutive crowns, on three.

Speaking at the ceremony held to present Sevilla with their double global distinction, club president, Jose Castro declared: "It's a source of satisfaction to be here today at an event that, without doubt, bestows prestige on Sevilla FC, the city of Seville, Andalusia and the whole of Spain. We've once again proved that the Sevilla FC brand is one of the greatest assets, if not the greatest, that our city boasts in its efforts to gain recognition throughout the world."

Castro and Sevilla's club captains were on hand to collect the accolade, which was presented by Guinness World Records adjudicator, Anna Orford at a ceremony which took place in the VIP lounge at the Ramon Sanchez-Pizjuan. This award once again sees the success and efforts of Sevilla FC receive the very highest recognition.