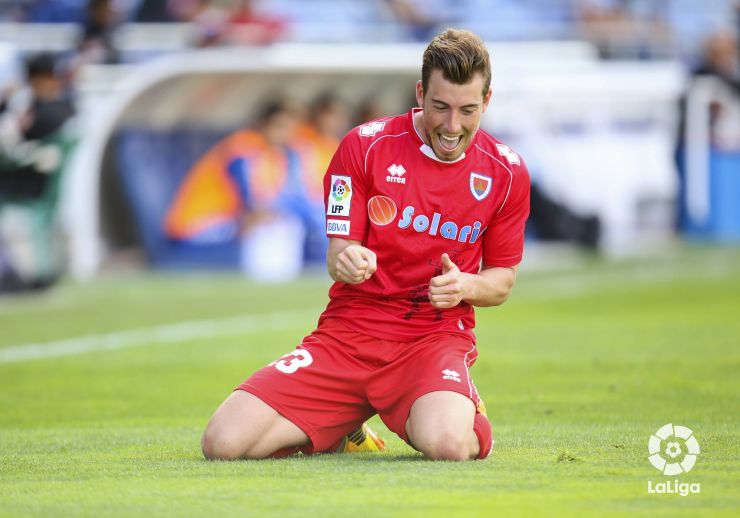 The team from Soria’s striker has scored nine goals in the Liga Adelante, one of which came last weekend against Ponferradina and lifted the team out of the relegation zone.

Youth and talent; two of the ingredients that have made CD Numancia striker Sergi Enrich stand out at the club from Soria and also in the Liga Adelante. His nine goals so far this season have led his team, who have been very consistent all year, to thirteenth place in the table, and they still have the chance to go all the way in the three games that are left to play.

Enrich is very familiar with the Liga Adelante, which is this year proving to be as vibrant and exciting as ever. His spell in the lower ranks of RCD Mallorca and time playing for RC Recreativo de Huelva and AD Alcorcón mean he has a wise head on his young shoulders. Despite his youth (24) he is already an experienced player in the division, and he is proving it in this tight 2013/2014 season.

His goal against SD Ponferradina gave his team a victory that was important enough to put it four points outside the Liga Adelante zone; a giant stride towards safety. In addition, if they continue this form (four matches without a loss) they could outdo themselves and dream of even higher heights: a place in the promotion playoff spots that are currently six points away (FC Barcelona B cannot go up as it is a reserve team).

The experience earned by the player shows at the team’s most testing moments and Enrich arrived at a time when the side from Soria was really in need of his presence. His debut in the Liga BBVA with Mallorca matured him as a player and he is now delivering some of his best football.

Numancia supporters looked on as Enrich scored the winner in a match that finished 1-2 against one of the toughest sides to beat in the division, SD Eibar. They will not forget his brace against RC Deportivo de La Coruña either, which earned them a valuable point in Riazor.

Sergi Enrich’s tally in front of goal has been vital for Numancia who, having only found the back of the net on 38 occasions, is the lowest scoring team in the Liga Adelante. From now until the end of the season, the Balearic Islander will be Juan Antonio Anquela’s main man up front, as he is the most in form player heading into the final stretch of the league campaign and is also the Numancia fans’ biggest source of hope.