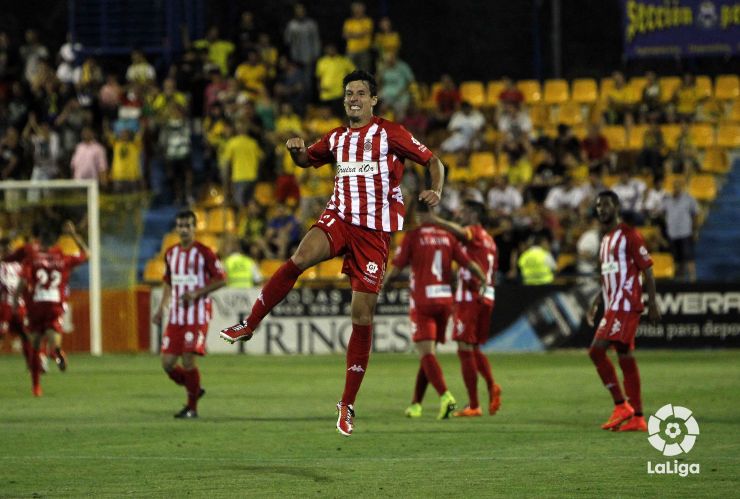 Sandaza: "We're not the same Girona as last year"

He is one of the most experienced forwards in the Liga Adelante and, this year, he hopes to become one of the leaders in a team that has made a strong start. LFP.es chatted to him.

He describes himself as "a hungry forward and a bit superstitious". That's Fran Sandaza (b. Toledo, 1984), the striker who has helped Girona FC make a successful start to the season. Now he hopes to continue this upward trend to complete what he hopes will be his big year. LFP.es spoke to him about his vision of football and his team’s objectives for this season.

LFP.es: You're second in the table and have completed your best start to the season in history. How is the dressing room feeling right now?

Fran Sandaza: We're very, very happy with the work we're doing. It’s a great young group of committed players and that can be seen in the results. The manager is also motivating us week after week and we want to stay positive.

The way we are training is very intense. The boss doesn't let anybody relax and all the players are keen to show what they can do.

Fran Sandaza: Teams have already noticed that we're not the same Girona as last year. When they play against us they’ll be more careful, more focussed, and they’ll approach the game differently.

LFP.es: What is it that Pablo Machín has managed to do or say to make this group so motivated?
Fran Sandaza: The way we are training is very intense. The boss doesn't let anybody relax and all the players are keen to show what they can do. All of this has come together and it's working. We know that our main objective is to survive, but we'll keep working to stay at the top and aspire to something bigger. For the time being, we want to carry on like this and work hard each week to win every game.

LFP.es: Has it been difficult to adapt to the style of the team?

Fran Sandaza: Not really. I've been around a long time, I've played for several clubs, I've worked with a lot of coaches and, ultimately, the most important thing for a footballer is to feel at home. I was made to feel very welcome here from the beginning. I have the confidence of the team and the boss, and that helps. Now my goal is to work hard and score lots of goals.

LFP.es: You scored twice in the first two games of the season for Girona. Could you have imagined such a good start?

Fran Sandaza: I arrived at Girona eager to do well and show that i'm a good forward. In Scotland I had a really good spell, I scored 18 goals in one season, and I haven't shown all of what I am in Spain. So this season I'm really focussed and committed to showing what I can do.

I'm powerful and have a burst of speed. I like to front up and I'm not going badly in the air.

LFP.es: In your best season at St. Johnstone FC you scored 15 league goals. Do you have a clear target this year?

Fran Sandaza: I never do because it's bad luck. I'll try to score as much as possible, but I'm a bit superstitious and I prefer not to have a specific figure in mind, because things never turn out the way you imagine.

LFP.es: What did you experience abroad contribute to making you the forward you are today?

Fran Sandaza: The five years I spent in Scotland made me stronger in every area. I learned to play much better on the turn, I developed my skills in the air and became a more seasoned player. When I left Valencia B I was weaker, so to speak, and going there hardened me in that sense.

LFP.es: How would you describe yourself as a striker?

Fran Sandaza: It's not me who should judge myself, I'd rather others did it, but I think I finish well, I'm powerful and have a burst of speed. I like to front up and I'm not going badly in the air. I play with a lot of desire on the field and persist until I get what I want.