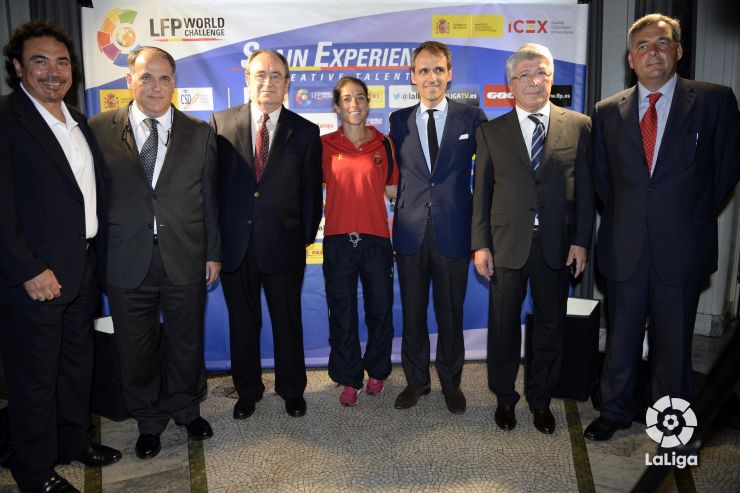 San Francisco and Spain, side by side at the 'Spain Experience' event

The LFP World Challenge event, which was held in the Northern Californian city, was attended by the likes of the LFP president, Javier Tebas, the Club Atlético de Madrid president, various members of the Spanish club’s first-team squad as well as by a number of Spanish entrepreneurs living in the area.

The LFP World Challenge tour is still in San Francisco, where the successful 'Spain Experience' event was held in which football, the entrepreneurial spirit, Spanish cuisine and culture were at the centre of attention.

The LFP World Challenge is part of the joint Program set up by ICEX España Exportación e Inversiones (ICEX Spain Trade and Investment) and the Liga de Fútbol Profesional (LFP), the aim of which is to support the internationalisation of Spanish businesses and to spread the values of the Spanish Brand.

The San Francisco leg of the 'Spain Experience' tour was also attended by a large number of Spanish businesses from different industries such as technology, gastronomy and education, all of which set up information stands at the event. As well as that, all those in attendance were able to enjoy Spanish cuisine, with chefs Mats Schuster and Daniel Olivela attending the event. To give the event even more of an authentic feel, Spanish music and a series of Spanish short films were played in the background.

During his speech, the LFP president, Javier Tebas, outlined the reasons behind the event. "This project is an attempt to bring La Liga to the whole world. The LFP World Challenge is joint project between the Liga Profesional de Fútbol de España, the Spanish Government and Spanish businesses, a project that is helping bring Spanish clubs and enterprises to a wider international audience. We want all our teams from the biggest to the smallest to be on the international stage, and we want the same for our businesses, from the biggest to the smallest. That is why this project came about. Today we are in San Francisco with Atlético de Madrid, an example of sporting excellence", said Javier Tebas.

Meanwhile, the Atlético president, Enrique Cerezo, highlighted the importance of being successful abroad in order to add value to the Spanish Brand. "Atlético's achievements last year were also achievements for the Spanish Brand. We are here for these few days to bring the best football on offer to California and as a world-class team, I would like to state that we are accompanied here today by other Spanish businesses with strong brands".

Consul Jorge Montealegre used his speech to highlight the importance of sport and events like the LFP World Challenge in order to help internationalise the Spanish Brand, while the ICEX representative, Isaac Barbero, thanked those in attendance, including the Atlético de Madrid squad members and the Spanish women’s field hockey team.

To conclude the event the LFP, Club Atlético de Madrid and the Spanish women’s field hockey team exchanged commemorative plaques and gifts, and later on all those in attendance went to see Atlético play their first match on the LFP World Challenge Tour against Major League Soccer's San Jose Earthquakes in Candlestick Park, San Francisco.